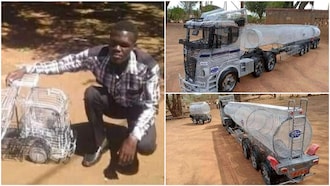 – With what looks like tiny wires, the young man built vehicles like a petrol tanker and trucks

Many who commented on the photos lamented the fact that there were talents like him out there without the necessary help.

Below are some of the reactions from people:

“We are busy legalising BBnaijaTv program and awarding humongous prices while wasting innocent talent’s on the street begging for help…naija the home of misplacement of priorities.”

“…Our government really need to retrace their track cos needs to get better n most get better. U can image this innovator empowered with about #200,000 it will go a long way.”

“Gud but support is needed from our government and private.”

It was gathered that Muhammad converted an old Volkswagen Beetle vehicle into a Rolls Royce replica. Pictures of the Nigerian standing proudly with his creation were shared on the micro-messaging platform.

In 2016, after his brother encouraged him toward his innovative path, he was said to have built an inverter circuit with CD4047 which could give power to a mobile phone.