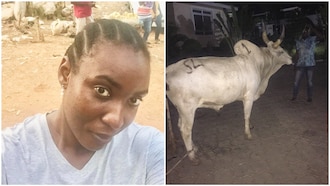 – A Nigerian lady, Chimdi Ibeawuchi, has said that she made a whole lot of money from selling cattle

– After many rough patches as an entrepreneur, Chidi said she now owns a company that is into food packaging.

A Nigerian entrepreneur, Chimdi Ibeawuchi, has revealed how she made N10 million shortly after her degree at the Caritas University in Enugu.

After school, she went into cattle business, something which took her to Gumel, Katagun, Azare, and Pastikum among other places.

In a Twitter post on Saturday, October 11, she said she loaded 11 trucks with 34 cows and transported them to Port Harcourt, Bayelsa, and Delta.

She cashed into the post-election moment when politicians were giving out cows as gifts to their constituents and party stalwarts.This lady just finished her secondary school, see the business she is doing to fund varsity degree (video)

During that era, she was able to sell many cows with just 19 mortality rates. She, however, hit a huge loss in 2012 when she took a business move prematurely.

Some of the challenges she weathered was a bounced cheque and several losses that made her neck-deep in debts.

A collage showing the lady and one of the cows she bought. Photo source: Twitter/@ChimdiIbeawuchi

With an apt piece of advice from her dad, she travelled to several places around the world to learn the ropes in entrepreneurship.

During her deep search for knowledge, she met billionaire businessman, Aliko Dangote, who taught her the importance of selling products that satisfy daily needs.

After realizing that only farmers in the value-chain sector are ready for the future, she launched a company called Ella’s FoodBank in 2019.

Presently, her company is constructing a process plant to package farm produce in the nation’s capital, Abuja.