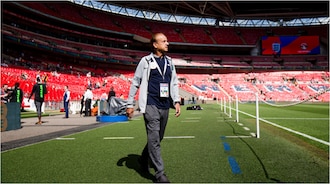 Nigeria vs Algeria: Gernot Rohr says Super Eagles are not after revenge.

Nigeria vs Algeria’s international friendly will be played on Friday, October 9, in Austria

Gernot Rohr who is the handler of the Super Eagles of Nigeria has stated clearly that his wards are not after revenge when they face reigning African champions Algeria in friendly tie.

The German and his players are currently in Austria preparing for the encounter against Algeria which will be played on Friday night, October 9.

Gernot Rohr explained below ahead of the coming game.

“It’s a test game, we want to see our new players. The objective is to prepare for AFCON and the World Cup.

“Algeria are unbeaten in 18 games, we want to stop them, we hope so. They are a strong team in Africa, the champions, it will be a big test for us.”

Meanwhile, Napoli striker Victor Osimhen will not be part of the Super Eagles squad that will face Algeria after being given the permission to stay in Italy.

There were fears of Coronavirus at Napoli which made the Nigeria Football Federation to withdraw Osimhen from the two coming games.

Nigerians were stunned on Thursday afternoon when a report purportedly quoting the Super Eagles coach Gernor Rohr as confirming the development.

It was gathered that the tactician earlier had an online interaction with selected journalists ahead of the tie slated for Friday evening, October 9.

Since return of football after it was earlier suspended in March, it is the first time the national team is converging and Rohr mentioned that four players were earlier affected, but they have since recovered.