This Extremely Rare Bird Is Half Male, Half Female (Pictures) 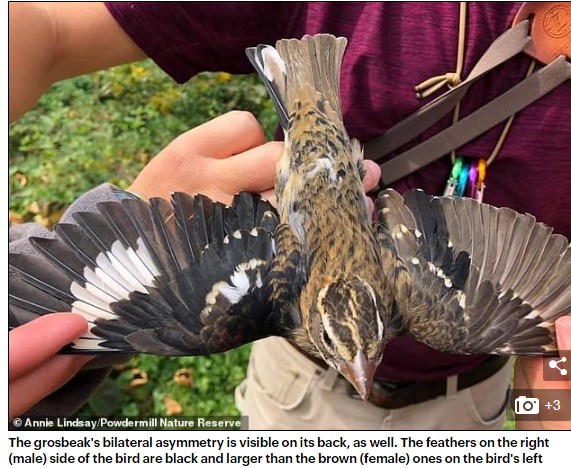 Researchers at a nature reserve in Pennsylvania discovered a truly odd bird – one with both male and female feather coloring.
Rose-breasted grosbeaks are sexually dimorphic, meaning males and females have different color plumage.
Males have black wing feathers, pink wing pits and breast spots that give it its name, while females have brown wings, yellow wing pits and no patches on their chest.
But a grosbeak observed at Powdermill Nature Reserve was split right down the middle – pink on the right side, yellow on the left.
The condition, called bilateral gynandromorphism, means the bird is both male and female, with one ovary and one testis.
This occurs when two sperm fertilize an egg that has two nuclei instead of one, which results in the egg to develop a chromosome from each sex.
The phenomenon has been observed in less than ten birds since Powdermill’s Avian Research Center began bird banding 64 years ago.
‘The entire banding team was very excited to see such a rarity up close, and are riding the high of this once-in-a-lifetime experience,’ said Annie Lindsay, bird banding program manager. ‘One of them described it as “seeing a unicorn.”‘
A large, seed-eating member of the cardinal family, the rose-breasted grosbeak (Pheucticus ludovicianus) is commonly found across eastern North America until about this time of year, when it migrates to Mexico or South America.
Since usually only the left ovary is functional in birds, and the left side of this bird is the female side, the bird could still theoretically lay eggs and reproduce.
It would depend on whether it sang like a male grosbeak, Lindsay said, which would attract females and possibly trigger an unfriendly territorial response from other males.
‘Bilateral gynandromorphism, while very uncommon, is normal and provides an excellent example of a fascinating genetic process that few people ever encounter,’ she said.
The extremely rare phenomenon occurs when two sperm fertilize an egg that has two nuclei instead of one.
The egg can developed male sex chromosomes on one side and female on the other, leading to a bird with a testis and other male characteristics on one half of its body and an ovary and other female characteristics on the other.
Female red-breasted grosbeaks are brown, with a thick white line above their eyes, and wing pits that are yellow.
Males have larger black feathers, with pink wing pits and pink dots on their chest.
This asymmetrical flyer was found on September 24 toward the end of the day, ‘so we almost missed it,’ Lindsay said.
The bird had not yet developed its breeding plumage, she added, when ‘it’s going to be even more starkly male, female.’
The colors will become even more vibrant, and ‘the line between the male and female side will be even more obvious.’
While rare, bilateral gynandromorphism has been observed in lobsters, crabs, snakes, butterflies, bees, chickens and other birds.
Lindsay has only seen one other grosbeak exhibit the usual trait 15 year ago, but its coloration was much less striking.
She brought this grosbeak back to her lab, where she took its measurements, plucked a few feathers for DNA testing and shot some TikTok videos, before letting it go.
‘The black wing on this grosbeak also measured longer than the brown side,’ she told the Allegheny Front, ‘which is consistent with the male of the species.’
Located about an hour outside Pittsburgh, the Powdermill Nature Reserve is part of the Carnegie Museum of Natural History.
Source: https://www.dailymail.co.uk/sciencetech/article-8815321/Bird-born-condition-male-female-chromosomes-exhibits-colored-feathers-sex.html