Buhari’s aide responds to call to end SARS, says it is a coordinated attack by cybercriminals 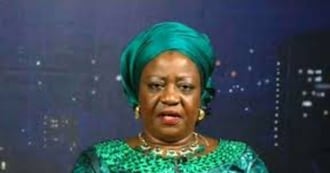 – The renewed call for the end of SARS is coming after some operatives were accused of shooting a young man in Delta state.

Lauretta Onochie, the personal assistant on social media to President Muhammadu Buhari has reacted to the call for the end of Nigeria Police Force’s Special Anti-Robbery Squad (SARS) following the outcry for their alleged brutality and harassment against Nigerians.

In a tweet she posted on Sunday, October 4, Onochie said the way some staff of SARS are unprofessional in their dealings is identical to the unprofessionalism amongst the army, police, civil service, public service, traders, lawyers, doctors, journalists, teachers, and pastors, etc.

According to the presidential aide, the recent outcry is a coordinated attack by cybercriminals who have been joined by unsuspecting innocent citizens.

Onochie said that though this is not the time for Nigerians to call for SARS to be scrapped, we must stand by our national institutions while working to improve their effectiveness.