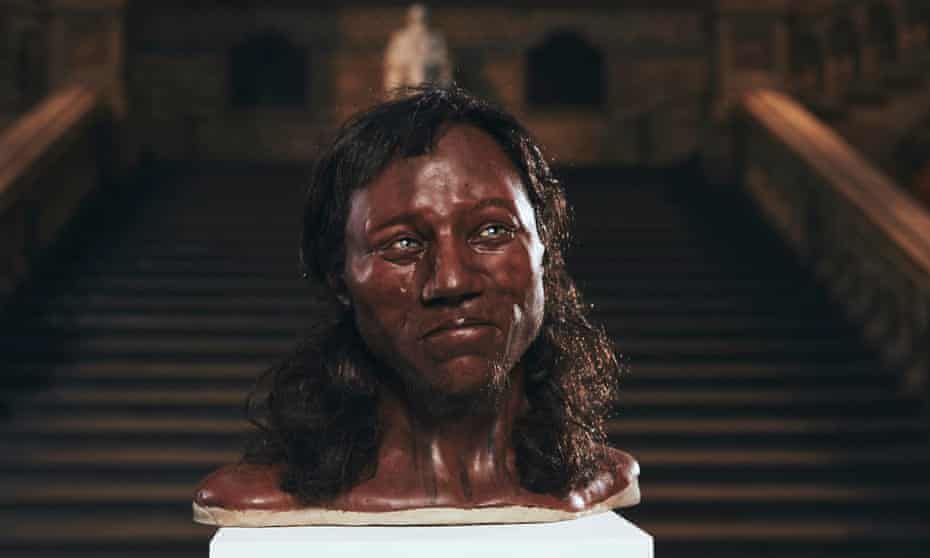 This article is more than 2 years old

The genome of Cheddar Man, who lived 10,000 years ago, suggests that he had blue eyes, dark skin and dark curly hair

The first modern Britons, who lived about 10,000 years ago, had “dark to black” skin, a groundbreaking DNA analysis of Britain’s oldest complete skeleton has revealed.

The fossil, known as Cheddar Man, was unearthed more than a century ago in Gough’s Cave in Somerset. Intense speculation has built up around Cheddar Man’s origins and appearance because he lived shortly after the first settlers crossed from continental Europe to Britain at the end of the last ice age. People of white British ancestry alive today are descendants of this population.

It was initially assumed that Cheddar Man had pale skin and fair hair, but his DNA paints a different picture, strongly suggesting he had blue eyes, a very dark brown to black complexion and dark curly hair.

The discovery shows that the genes for lighter skin became widespread in European populations far later than originally thought – and that skin colour was not always a proxy for geographic origin in the way it is often seen to be today.
Cheddar man

Tom Booth, an archaeologist at the Natural History Museum who worked on the project, said: “It really shows up that these imaginary racial categories that we have are really very modern constructions, or very recent constructions, that really are not applicable to the past at all.”

Yoan Diekmann, a computational biologist at University College London and another member of the project’s team, agreed, saying the connection often drawn between Britishness and whiteness was “not an immutable truth. It has always changed and will change”.

The findings were revealed ahead of a Channel 4 documentary, which tracked the ancient DNA project at the Natural History Museum in London as well as creating a new forensic reconstruction of Cheddar Man’s head.

To perform the DNA analysis, museum scientists drilled a 2mm-diameter hole into the ancient skull to obtain a few milligrams of bone powder. From this, they were able to extract a full genome, which held clues about this ancient relative’s appearance and lifestyle.

The results pointed to a Middle Eastern origin for Cheddar Man, suggesting that his ancestors would have left Africa, moved into the Middle East and later headed west into Europe, before eventually crossing the ancient land bridge called Doggerland which connected Britain to continental Europe. Today, about 10% of white British ancestry can be linked to this ancient population.

The analysis also ruled out an ancestral link with individuals inhabiting Gough’s Cave 5,000 years earlier, who appear to have performed grisly cannibalistic rituals, including gnawing on human toes and fingers – possibly after boiling them – and drinking from polished skull cups.

Britain was periodically settled and then cleared during ice ages until the end of the last glacial period about 11,700 years ago, since when it has been continuously inhabited.

Until now, though, it hasn’t been clear whether each wave of migrants was seeded from the same population in mainland Europe; the latest results suggest this was not the case.

The team homed in on genes known to be linked to skin colour, hair colour and texture, and eye colour. For skin tone, there are a handful of genetic variants linked to reduced pigmentation, including some that are very widespread in European populations today. However, Cheddar Man had “ancestral” versions of all these genes, strongly suggesting he would have had “dark to black” skin tone, but combined with blue eyes.

Cheddar Man would have lived a hunter-gatherer lifestyle, making sharp blades from flints for butchering animals, using antlers to whittle harpoons for spear fishing and carving bows and arrows.