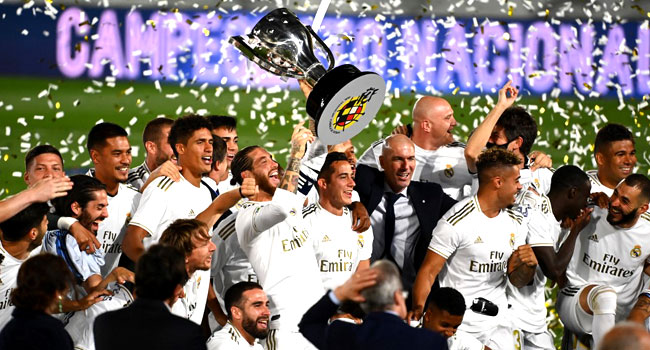 Barcelona have congratulated Real Madrid for winning the 2019/2020 La Liga title on Thursday after they (Real Madrid) beat Villarreal.

Barcelona took to their Twitter handle to congratulate them for securing their 34th domestic crown.

“Congratulations to Real Madrid on winning the 2019/20 La Liga title,” the club tweeted on their handle.

Barca had to prevail against Osasuna at home and hope Madrid slipped up but their fading challenge ended with a 2-1 defeat at Camp Nou, despite a brilliant Lionel Messi free-kick.

It means Madrid claim their third La Liga title in 12 years, after a relentless run of form since Spanish football resumed on June 11 following the coronavirus pandemic.

Zinedine Zidane’s side have won 10 games out 10 since the restart. They have conceded four goals in that time and never been behind in a match.

“For me, this is one of the best days in my professional career,” said Zidane. “After lockdown and everything, it’s astonishing.”

Asked if it trumps the Champions League titles Madrid won in his first spell as manager, Zidane said: “This is better than anything. It takes a tremendous effort to win La Liga. After 38 matches, you have more points than anyone else. It’s bloody fantastic.”

Madrid have also been awarded five penalties during the run-in, some of them controversially, and this one caused a stir too as Sergio Ramos tried to roll the ball to Benzema, who finished, but had entered the area too early.

Much to Villarreal’s irritation, Madrid were allowed to retake and this time Benzema made no mistake before Vicente Iborra headed in what proved a late consolation.