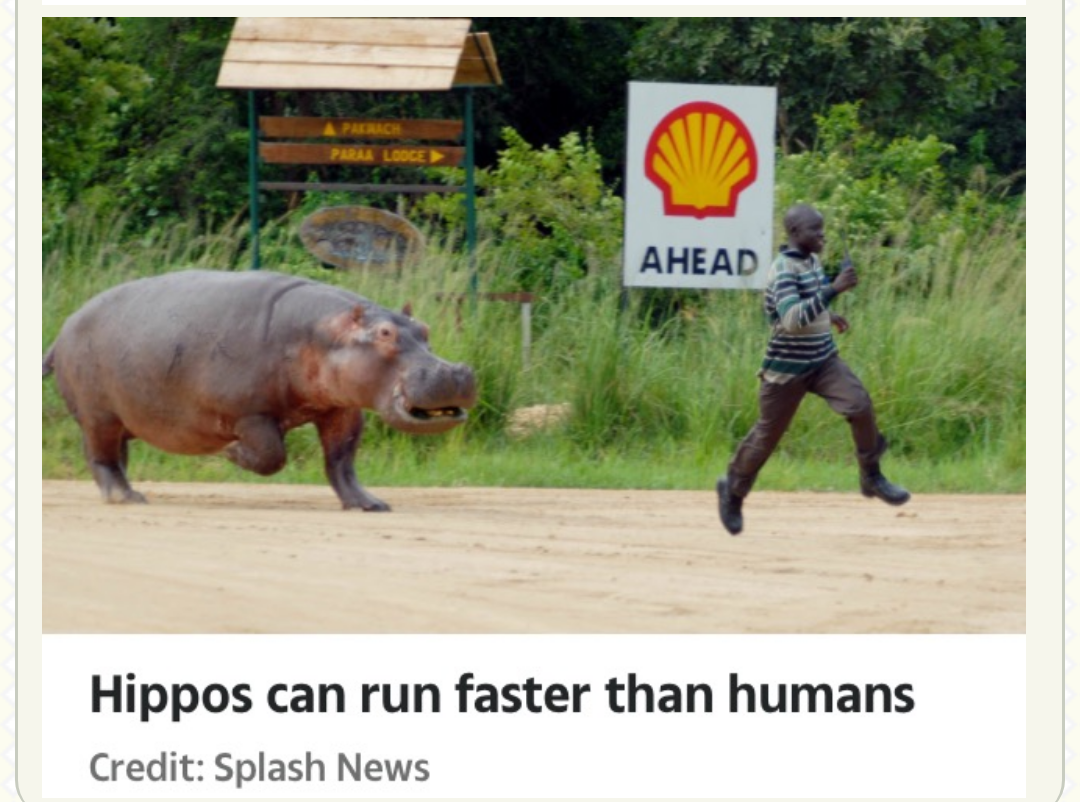 THE hippo doesn’t immediately spring to mind when imagining deadly killers but its placid exterior hides a fearsome temper.

Male hippos weigh in at around 2.5 tons or more and are fiercely protective of their territory, taking on crocodiles that cross their paths.

Their powerful jaws can easily snap a croc or a canoe in half and they are armed with razor sharp teeth.

Every year they kill around 500 people in Africa – more than lions, elephants, leopards, buffaloes and rhinos put together.

Kenya’s Lake Naivasha is home to 2,000 of the deadly giants and a terrifying attack was captured by photographer Frederico Genovese.

Mathew Wanjiuku was ambushed by one of the giant creatures and held captive for 10 minutes while the animal continued to bite him.

“Stamping its feet and swinging its head vigorously, the hippo appeared to be trying to trample its victim,” said Frederico.

“There was a chorus of helpless screams coming from the water’s edge.”

The hippo can then be seen chomping on his arm, shoulder, and torso, leaving him on the floor losing blood and with seemingly no chance of escape.

Onlookers banged on a metal sheet to scare the huge mammal and eventually it moved off, leaving Mathew covered in blood.

Paul Templer knows exactly what it’s like to get up close and personal with hippo.

A cranky hippopotamus left the tour guide with 39 “major” bite wounds and only one arm after the terrifying assault in his native Zimbabwe in 1996.

His near-fatal attack occurred near Victoria Falls and started when the animal knocked one of his pals out of his canoe.

“I managed to move my fingers around and was able to feel the bristles on the hippo’s snout. So then I knew where I was – I was head first up to my waist in a hippo’s throat.”

When the hippo eventually spat Paul out, he quickly swallowed the safari guide again – but this time from the feet first.

But as he swam towards his friends he saw “monster hippo” charging towards him with its jaws wide open and dragged him to the bottom of the river.

Paul was eventually rescued by one of his friends who he says showed “incredible bravery” to paddle over and grab him.

Fisherman Enock Romano’s legs were amputated under the knees suffering deep wounds when he was crushed by a hippo.

He was fishing with a friend on the beach of Lake Naivasha when the hippo attacked them.

Nurse Susan Kamau, said the two were brought to the hospital in serious condition and Enock’s legs of one of the victims were completely crushed.

“It was impossible to treat them,” she told The Standard.

Marius Els considered his pet hippo “like a son to me” and would often ride on the back of the animal, who he had adopted.

But the 40-year-old was found dead in a river after being repeatedly bitten by the huge hippo.

POUNCED ON WHILE SWIMMING

Jacob Kandjimi was swimming in a river when a hippo attacked, leaving him with deep wounds in his legs.

The six-year-old was in the Okavango River with his elder brother when the attack happened and he was rushed to hospital.

Luckily he survived the attack, which happened in Namibia in 2020, but was reportedly left traumatised by his ordeal.

Despite their un-athletic exterior, the beasts can run faster than humans with fatal encounters common.

Hippos can reach speeds of 30mph and can easily outrun a human.

That’s around 3mph faster than Usain Bolt, the fastest humanm who hit 27mph when he broke the 100 metres world record.

One gamekeeper in Uganda was forced to run for his life after disturbing a hungry beast having its favourite meal of grass.