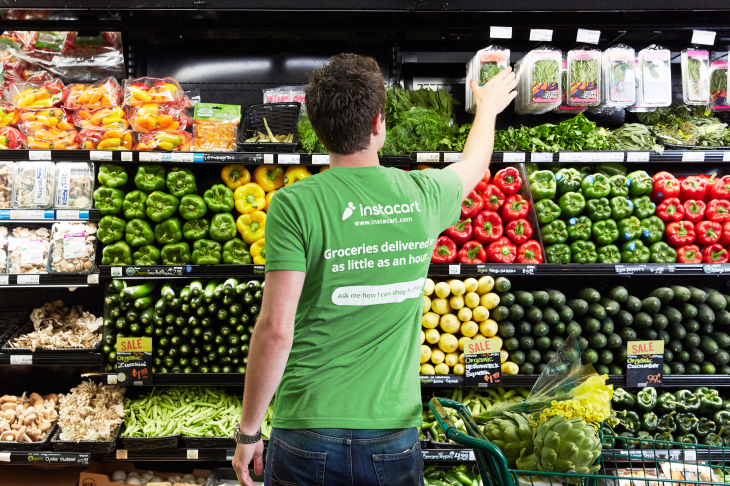 Despite the slow reopening of the U.S. economy over the past several weeks, online grocery shopping is continuing to reach ever-higher numbers as Americans seem to be in no rush to return to the store. According to new research released today by Brick Meets Click and Mercatus, U.S. online grocery sales hit a record $7.2 billion in June, up 9% over May, as 45.6 million households turned to online grocery pickup and delivery services for a larger portion of their grocery needs.

This figure is higher than the $4 billion seen in March 2020, when the U.S. first went under coronavirus lockdowns. Since then, online grocery sales have been growing quickly — jumping to $5.3 billion in April, then $6.6 billion in May, as more consumers shifted their shopping to online services, grocery included.

The customer base for online grocery also grew from 39.5 million monthly actives in March to now 45.6 million as of June, the report found.

Remarkably, only 16.1 million customers were using online grocery as of August 2019, totaling then just $1.2 million in sales.

The growth isn’t just due to a large influx of new customers to online grocery, but also due to more frequent orders. Customers may be ordering from online services not only for their large “stocking up” trips, but also for those smaller grocery runs they would often do in between — to grab ingredients for their weekly recipes or to replace the more quickly depleted items, like milk, bread and other staples, perhaps.

According to the new research, order frequency ticked up from 1.7 orders per month for active households in May to 1.9 orders in June, demonstrating this increase.

In addition, more retailers, including independents, have added capacity for online order fulfillment amid the coronavirus pandemic to meet consumers’ changing needs. This has also resulted in an increase in sales as more customers are able to shop online and get a time slot for delivery or pickup.

Walmart Grocery in April even began pilot testing a way to offer two-hour “Express” grocery delivery service to customers who were willing to pay an upcharge. The company said this was a direct result of its newly added capacity aimed at serving its online grocery customer base. Instacart, meanwhile, added new features in April aimed at opening more delivery windows. And many retailers — including Amazon, Walmart, Instacart and Shipt, among others — have been hiring to help address the growing number of online orders.

When asked about their increased usage of online grocery in June, consumers reported fears of contracting coronavirus as their main concern, the report said. Specifically, 44% of households claimed they had “high levels” of concern about someone in their home being infected, up 2 percentage points from the prior month. This increase was also almost entirely driven by the 9% increase among shoppers in the over-60 age segment.

But on the downside, the increased choice in online grocery providers has made it more difficult for services to attract repeat usage, the data indicates. As of June, the likelihood of a shopper to use a specific online grocery service again within the next 30 days now sits at 57%. While this figure did grow by 1 percentage point since May, it’s still far below the pre-COVID 74% repeat rate seen back in August 2019.

General interest in online grocery was also growing. Among both active online grocery shoppers and those not active, 32% said they were either “extremely” or “very likely” to use a service in the next 90 days — up 2 percentage points from May. The interest, not surprisingly, was strongest in households that had used an online grocery service in June, with 57% showing strong interest, compared with only 17% of the non-active households.

The data for the research was sourced from 1,781 U.S. adults in June (6/24-6/25), with responses weighted by age to reflect the national population of U.S. adults. The firms’ prior surveys also used a similar methodology, timing and sampling.

“Even though some retailers have seen sales decline within their respective business, the new reality of increased capacity across the market – and related greater choice (or options) for shoppers – means that all grocery retailers will need to accelerate their efforts to make shopping online even more seamless to thrive going forward,” said David Bishop, partner and research lead, Brick Meets Click, in a statement.