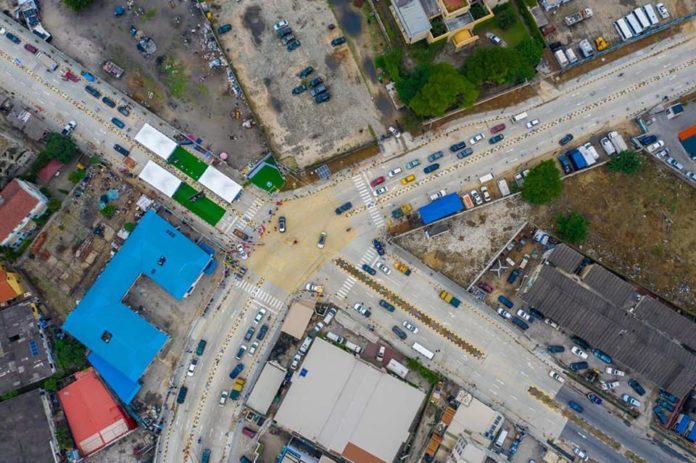 It is a huge traffic relief for residents and road users around Iru and Victoria Island axes of Lagos State. Governor Babajide Sanwo-Olu, on Thursday, commissioned Victoria Island-Lekki Traffic Circulation Project in which seven gridlock-prone roads were completely re-designed and re-constructed with concrete slabs.

The improved roads are within the commercial areas of Iru and Victoria Island. The Victoria Island-Lekki Traffic Circulation Project was delivered through the Public Infrastructure Improvement Partnership (PIIP) framework, under which the State Government collaborated with Access Bank Plc and Planet Projects Limited to bring the project to reality.

Last December, Sanwo-Olu flagged off the construction of the roads, which were notorious for heavy traffic congestion that affected the growth of businesses and reduced productivity.

Cutting the ribbon to officially declared the roads open for public use on Thursday, the Governor said it was another promise fulfilled by his administration in its traffic improvement programmes. He said the improvement and re-construction work done on the roads had enhanced road connectivity and traffic flow on the axis. Sanwo-Olu added that the project had also reduced travel time for commuters, eliminated perennial flooding hitherto experienced in the area, and boosted intermodal transportation. He said: “One of the critical challenges experienced by residents and road users along this axis was the heavy traffic congestion occasioned by the geometric increase in traffic volume, which led to a significant reduction in productivity and growth business activities in this highly commercial location. As Government, we resolved to work in partnership with public-spirited corporate organisations to embark on the road improvement project. This project was executed through the Public Infrastructure Improvement Partnership (PIIP) arrangement.

“Today, I have the pleasure to hand over these improved roads to users and residents. This project has led to an improvement in road connectivity and traffic flow. We have also reduced travel time, eliminated perennial flooding issues, enhanced intermodal transportation.

Most importantly, we have improved the health and socio-economic well being of the people through the Victoria Island–Lekki Circulation Project in Oniru Axis.”
Sanwo-Olu explained that the implementation of the Transportation and Traffic Management pillar of his administration’s T.H.E.M.E.S.

He said the key outcome from the execution of the Circulation Project was the traffic diffusion, which, he said, had made a considerable positive impact on businesses and residents living in the area.

The Governor said the pressure being exerted on the public finances by various sectors made it difficult for the State Government alone to fund infrastructure, pointing out that the only available option was to create extra-budgetary capital for roads maintenance and improvement.

“While we hope to continue to harness the benefits this collaboration, I am inviting the Organised Private Sector to partner with Government for maintenance and rehabilitation of existing infrastructure so that the Government can concentrate more on the provision of new road Infrastructure. We will reciprocate this kind gesture in commensurate measure.”
Sanwo-Olu urged residents and road users to take ownership of the rehabilitated roads, advising them to guard the infrastructure jealously.

“Government and Access Bank have done their bit. The project remains a public property owned by all residents. Therefore, protecting the roads will further encourage the sponsors, other corporate organisations and Government to do more,” the Governor said.

Special Adviser to the Governor on Works and Infrastructure, Engineer Aramide Adeyoye, described the project as “iconic”, pointing out that it was one of the first road rehabilitation exercises to be flagged-off by the Sanwo-Olu administration under PIIP framework.

She said the PIIP arrangement would form the bedrock of the current administration’s strategy to increase the participation of the private sector development programmes.
Group Managing Director of Access Bank Plc, Mr. Herbert Wigwe, applauded the State Government for supporting the initiative conceived by the bank.

He said the financial institution would be willing to partner more with the Government to deliver more projects.

The Oniru of Iru Kingdom, Oba Omogbolahan Lawal, praised both the State Government and the bank for bringing the Circulation Traffic Project to reality. He called on other corporations that have offices in Victoria Island to embark on similar development projects for improved commercial activities on the axis.

There is also improvement work carried out on seven major junctions along Iru –Victoria Island axis to aid free flow of traffic.