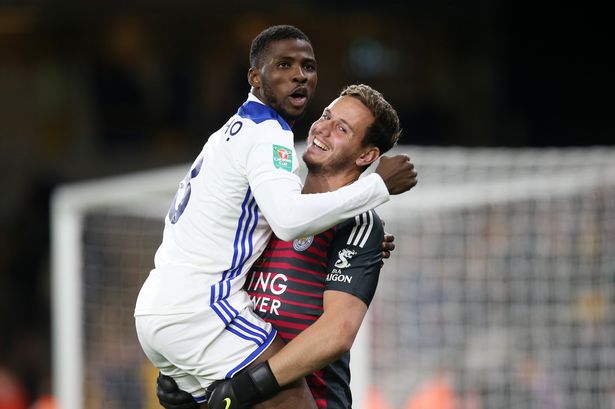 Leicester City’s “best penalty taker” has only ever taken one penalty for them.

Perhaps surprisingly, Kelechi Iheanacho has been named the most reliable from the spot at City by team-mates Wilfred Ndidi and Christian Fuchs.

But, in his three seasons at the club, Iheanacho has not once been called upon to step from 12 yards in a regular game, only once taking a penalty in a shoot-out, scoring the winner against Wolves in the Carabao Cup in 2018-19.

City have had six shoot-outs over the past three seasons, but the tie at Molineux is the only one in which the 23-year-old has been on the pitch at full-time.

Asked to name the City player he’d back to score a decisive penalty, Ndidi chose his countryman, saying: “Kelechi’s never missed a penalty. I’ve never seen him miss a penalty,” to which Fuchs agreed.

Ayoze Perez, relatively new to the club, responded with a raised eyebrow: “When is he even taking penalties?”

But Ndidi and Fuchs doubled down. Ndidi said: “You’ve not seen him? He never misses,” before Fuchs added: “He’s unbelievable. The best penalty taker I’ve seen.”

In total, City have received 21 penalties since Iheanacho arrived from Manchester City.

Jamie Vardy has taken 17 of those, scoring 14. The others have fallen to James Maddison, who has scored one from two, Ayoze Perez, who bagged his only spot-kick, and Demarai Gray, who saw his only penalty saved.

At Man City, Iheanacho did take one penalty, scoring in an FA Cup tie against Aston Villa.