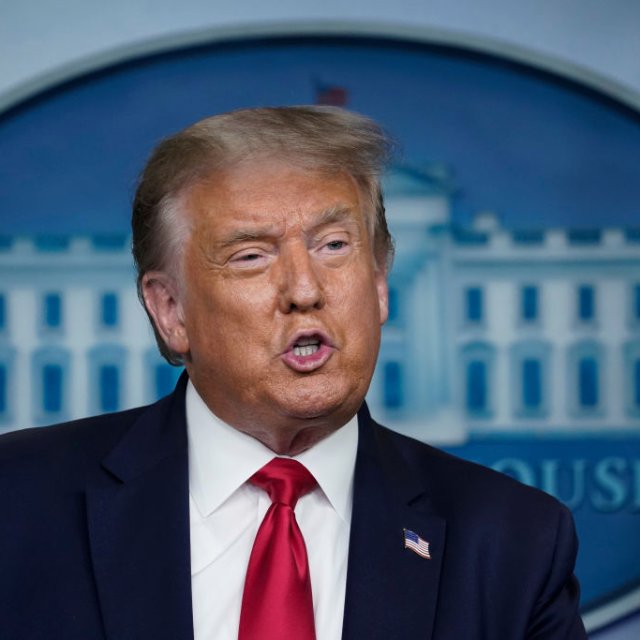 During an interview with Axios on HBO that aired Monday night, President Donald Trump mischaracterized the U.S. COVID-19 death rate and underplayed the high rate of deaths in proportion to the U.S. population.

During the interview, which was filmed on July 28, Axios reporter Jonathan Swan brought up the recent surge in COVID-19 related deaths in the U.S., pointing out that, at the time the interview was recorded, the U.S. was reporting over 1,000 deaths per day.

The President pushed back against Swan’s statement, referring to charts he had brought with him and saying, “Right here, the United States is lowest in numerous categories, we’re lower than the world, we’re lower than Europe.”

Make sense of what matters in Washington. Sign up for the daily D.C. Brief newsletter.

The U.S. Centers for Disease Control and Population (CDC) defines “mortality rate” as “a measure of the frequency of occurrence of death in a defined population” over a specific period of time. According to the non-profit fact checking project PolitiFact, the mortality rate shows how “common” it is for someone to die from COVID-19 in a given population—such as the U.S.—while the number of deaths in proportion to the number of cases shows how likely it is for someone to die from COVID-19 once they’ve already been infected.

As of Tuesday morning, among the 20 countries most affected by COVID-19 in the world, the U.S. has the fourth-highest number of COVID-19 deaths per 100,000 people, ranking behind only the United Kingdom, Peru and Chile, according to Johns Hopkins University. Meanwhile, the U.S.’s number of deaths per 100 confirmed cases (its observed case-fatality ratio) is 14th among the 20 countries most affected by COVID-19, per JHU, but still higher than Chile, India, Argentina, Russia, South Africa and Bangladesh.

U.S. COVID-19 numbers sharply rose throughout July amid widespread reopening measures that experts have criticized as having been premature. The high numbers of cases cannot be attributed to a higher amount of testing because the number of positive tests are also rising. According to an analysis from TIME, COVID-19 related deaths in the U.S. have risen 19.8% over the past 14 days as of Tuesday morning.

During the Axios on HBO interview, Swan pushed back against Trump’s characterization of the U.S.’s death rate:

Swan: “I’m talking about death as a proportion of [U.S.] population. That’s where the U.S. is really bad. Much worse than South Korea, Germany, etc.”

Trump: “You can’t do that. You have to go by the cases … What it is says, is when you have somebody—where there’s a case, the people that live from those cases.”

Swan: “It’s surely a relevant statistic to say ‘if the U.S. has X population and X percentage of death of that population’, versus South Korea.”

Trump: “No, because you have to go by the cases-”

Trump: “I won’t get into that because I have a very good relationship with the country, but you don’t know that, and they have spikes.”

Trump then showed Swan another chart that appeared to show the U.S.’s COVID-19 death rate in proportion to the number of cases, and continued:

Trump: “We’re last, meaning we’re first, we have the best,”

Swan: “A thousand Americans are dying a day. But I understand on cases it’s different.”

Trump: “No, but you’re not reporting it correctly Jonathan.”

Swan: “Yeah we do more tests-”

Trump: “Well don’t we get credit for that? And because we do more tests, we have more cases.”

During the same interview with Swan, President Trump also spoke about the late civil rights icon and Democratic Rep. John Lewis, who died on July 17 at the age of 80 from pancreatic cancer.

When asked how he thinks history will remember the Congressman, Trump responded, “I don’t know. I don’t know John Lewis, he chose not to come to my inauguration. I never met John Lewis, actually, I don’t believe.”

Swan then asked if Trump found the civil rights leader impressive. Trump responded, “I can’t say one way or the other. I find a lot of people impressive. I find many people not impressive.”

Lewis was chairman of the Student Nonviolent Coordinating Committee, one of the organizers of the 1963 March on Washington and lead the 1965 Selma to Montgomery March across the Edmund Pettus Bridge, where he was attacked and beaten by police.

When asked by Swan if he found the civil rights leaders’ story impressive, Trump said, “He was person that devoted a lot of energy and a lot of heart to civil rights, but there were many others also.”

Trump also said he would “have no objection” to renaming the Edmund Pettus Bridge in Selma after Lewis.

You can watch the full Axios interview here.