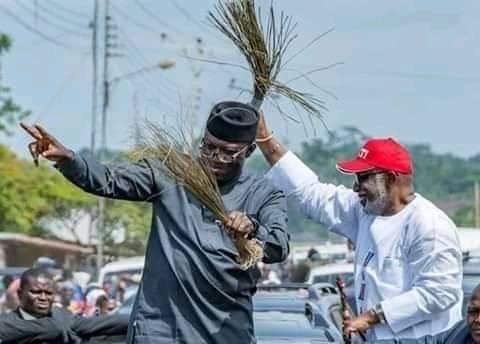 FAYEMI CONGRATULATES AKEREDOLU ON RE-ELECTION
….says Ondo electoral victory a wake-up call for APC
The Governor of Ekiti State, Dr Kayode Fayemi has congratulated Ondo State Governor, Mr Rotimi Akeredolu (SAN) on his re-election for a second term in office.
Governor Fayemi in a statement in Ado-Ekiti on Sunday, said Akeredolu’s electoral victory was an attestation to the fact the electorate would always reward a performing leader and administration with their votes.
Dr Fayemi also commended the people of Ondo State for their peaceful conduct at the poll, a situation which he said greatly reduced the pre-election tension in the state in addition to crippling the antics of purveyors of violence.
The Ekiti State Governor also congratulated the national leadership of the All Progressives Congress (APC) for proper coordination. He also lauded the leaders of the party in Ondo State for closing ranks ahead of the election and working together to achieve victory for the party.
The Ondo State experience, he says, should be a wake- up call for the party that effective coordination and sincerity of purpose are necessary for electoral victory.
“It is a new day in Ondo State. Congratulations to my brother Governor, Rotimi Akeredolu (SAN) and a bigger congratulation to the APC members in the state. The biggest applause, however, goes to the good people of Ondo State for ensuring the election was held in an atmosphere devoid of rancour, violence and blood-letting as many had predicted.
“It is heart-warming to see the electorate reward Governor Akeredolu’s good performance in terms of industrialisation and infrastructure development of the state among others with electoral victory.
“To whom much is given, much should be expected. I have no doubt that the good people of Ondo State would witness a greater level of socio-economic, industrial and infrastructure development in Governor Akeredolu’s second term.
Governor Fayemi urged the APC leadership to build on the electoral success in Ondo State for future elections.
“It is a wake-up call that with a laser beam focus, proper planning, unity and sincerity of purpose, elections are almost always winnable. It is hoped that the various bye elections coming up at the end of the month will benefit from this renewed vigour and focus in our party”, Dr Fayemi added.
Yinka Oyebode
Chief Press Secretary to the Governor