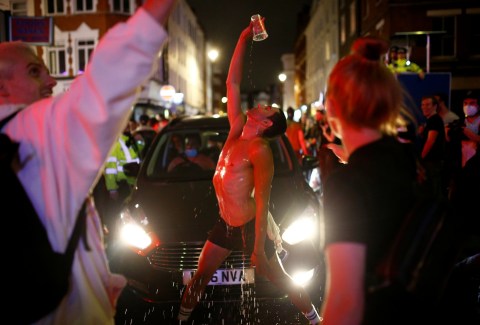 The streets of England were filled with carnage on Saturday night as thousands of party-goers hit bars and pubs for the first time in 104 days, with some forced to close early due to arrests and anti-social behaviour.

Experts predicted revellers downed around 15 million pints on ‘Super Saturday,’ as Brits left the confines of their homes and flocked to drinking holes as Covid-19 restrictions were eased, allowing the hospitality industry to reopen.

Images show the streets of English cities and towns packed full of drinkers appearing to ignore social distancing rules, sparking fears of a second coronavirus wave as Professor Chris Whitty cautioned the pandemic ‘is a long way from gone’.

Partygoers were seen twerking on cars, brawling, stumbling over, and pouring booze over their body like a scene from Flashdance, while police were out in force keeping an eye on the crowds.

London’s Soho was described as ‘absolute madness’ with party-goers staying out into the early hours of Sunday. Pictures of the night have sparked fears over a second peak, amid concerns that the R rate in the capital has risen above 1 again.

Some punters headed out to their local from 6am, with one man in Manchester describing his first pint of Carling like ‘an angel p**sing on the tip of me tongue’ to the MEN.

Drinkers had been told to get used to the ‘new normal’ at pubs and bars featuring longer, social distanced queues, quieter music, hand sanitiser, disposable menus, and even increased prices as the hospitality industry worked to make their businesses safe to reopen.

But after working a long night shift, the chairman of the Police Federation of England and Wales said it was ‘crystal clear’ that drunk people are unable to stick to the one-metre plus social distancing rule as restrictions were eased.

John Apter said during the busy night of mayhem his team grappled with all sorts of scenes, including naked men who had enjoyed a few too many on their first night back on the town.

He tweeted: ‘We dealt with anti-social behaviour, naked men, possession of class ‘A’ drugs, happy drunks, angry drunks, fights, more angry drunks and was called a fascist pig by somebody we tried to help! What was crystal clear is that drunk people can’t/won’t socialy [sic] distance.

‘It was a busy night but the shift managed to cope. I know other areas have had issues with officers being assaulted. Now heading home, to those still on shift please stay safe.’

Despite the scenes of carnage, Health Secretary Matt Hancock said this morning that the vast majority of people who went out were ‘doing the right thing’ and following social distancing.

By 9pm last night, several pubs in Lincoln and Nottinghamshire had closed early due to drink-related anti-social behaviour, while another in Leicestershire also shut after a customer was assaulted and suffered neck injuries.

Inspector Craig Berry from Nottinghamshire Police said: ‘Officers were quickly on the scene to deal with a number of alcohol related anti-social behaviour reports including a smashed window and minor assault.

‘As a result four arrests were made by officers and we supported licensees who chose to close their own premises.’

Devon and Cornwall police said they had received more than 1,000 calls yesterday, with the majority related to drink-related anti-social behaviour.

Meanwhile, Dorset Police said they had recorded 525 incidents in 24 hours.

A brawl also broke out on the High Street in Brentwood, Essex, leading to four arrests.

‘4 people arrested. 2 of my team have arrested and are currently on the way to custody.’

Speaking on Sky’s Ridge On Sunday, the health secretary said: ‘Well I think that from what I’ve seen, although there’s some pictures to the contrary, very, very largely people have acted responsibly.’

He added: ‘So overall I’m pleased with what happened yesterday. It was really good to see people out and about and largely, very largely social distancing.’

Mr Hancock said ‘the large proportion of people, the vast majority of people are, I think, doing the right thing’.

He added: ‘But of course we’ll take action when we need to when… if the minority break the rules.’

The night before pubs reopened the prime minister urged Britons to not let the country down warning that we are ‘not out of the woods yet’.

Hospitals had been told to prepare for July 4 as if ‘it’s New Year’s Eve’ awaiting a surge in A&E admissions.