Why U.S, UK, Others Are Monitoring Magu’s Probe 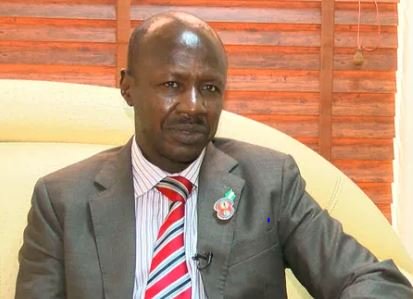 SOME of Nigeria’s strategic partners in the anti-corruption battle have taken more than a passing interest in the ongoing probe into activities of the Economic and Financial Crimes Commission (EFCC) under suspended acting Chairman Ibrahim Magu.

Key countries – some of them having mutual legal assistance treaties with the country – are monitoring the process of the investigation, it was learnt at the weekend.

For one week, Magu has been detained. He was accosted on the road in Abuja and dragged to appear before the Justice Isa Ayo Salami Presidential Investigation Panel, which is probing allegations levelled against him by Attorney-General of the Federation and Minister of Justice Abubakar Malami.

On Sunday, he denied the claim that he failed to account for the interest in the N550 billion recovered fund kept in CBN’s custody.

In a statement by his lawyer Wahab Shittu, Magu said such recovered fund kept with the Central Bank of Nigeria do not generate interest.

The statement said: “It is falsehood that Magu placed N550 billion recovered loot into a deposit account.

“The alleged transaction never featured in the proceedings before the Salami panel. Magu was never confronted with any such allegation by the panel and the news is blatant falsehood.

“To the best of Magu’s knowledge, no such amount is in any such account and he remains aghast at such outrageous figures. No one has confronted Magu with such allegations.

“All recovered funds are lodged in the Treasury Single Account (TSA) with the Central Bank of Nigeria (CBN). Such recovered funds do not generate interest. This is elementary and can be verified from the CBN and the federal ministry of finance.

“This can also be confirmed from other government revenue generating agencies. Funds kept in TSA account do not generate interest.”

Investigation by our correspondent revealed that the United Kingdom, the United States and others are closely monitoring development on the allegations against Magu and the activities of the Presidential Investigation Committee.

There are some investigative cases in which Nigeria and some of these foreign nations are collaborating on.

Looted funds, which Nigeria is battling to recover, were stashed away in some of these countries.

A top diplomatic source said some of these nations are taking their time to monitor what is going on which is why they have not issued a joint statement on the development in EFCC.

The source said: “Despite the fact that we have our individual intelligence on the development in your country, we are sitting and watching what is going on at the investigative committee.

“We want to know if the allegations against Magu are true; if the process of investigation is in conformity with international best practices; whether there is fair hearing and the implications of the challenge at hand for the anti-corruption campaign in your country.

“We are as curious as every Nigerian in knowing the truth about all these allegations. Ultimately, we desire strict commitment to the Rule of Law, social Justice, upholding the fundamentals of democracy and human rights, fairness and equity to all and a corruption-free Nigeria.”

Another senior diplomat, who has deep knowledge of Nigerian politics, said: “My country knows a lot about power play in Nigeria ( even as it may apply to this case) but we are careful in dabbling in the affairs of your country.

“We are being meticulous in monitoring the fact-finding committee because its findings and recommendations might determine your commitment to the anti-graft activities.”

An expert in one of the international agencies said: “All members of the Diplomatic Corps, global financial institutions and donor agencies are interested in the ongoing investigation of EFCC’s activities under Magu.

“We have been comparing notes at the diplomatic level, especially by countries like the UK, the U.S., France, Switzerland, Italy, UAE and others. We are giving all the parties the benefit of the doubt, even though the activities of some political office holders are predictable in this circumstance,

“Whatever is the outcome, it will assist in reaching conclusions on where Nigeria is headed in fighting corruption and ensuring justice.”

Also at the weekend, a global coalition against corruption wrote to President Muhammadu Buhari over Magu’s travails.

It alleged that the former EFCC boss may be “a pun in the desperate attempts by corrupt officials to kill the EFCC or turn the agency into a willing tool of corrupt politicians.”

The groups have been investigating corruption by Nigerian politicians and officials and the complicity of European and U.S. banks, companies and others in facilitating such corruption

The groups said: “What is going on in Nigeria is of concern to the international community. Mr Magu has proved himself to be up to the task. His determination to fight corruption is evident by the recovery of stolen funds and properties plus his own high moral ground earned at the cost of diligence and hardwork never before seen.

“His removal questions the will of Nigeria to deal with a major cause of the country’s underdevelopment which is corruption.

“Some of the groups’ most significant contributions to Nigeria’s anti-graft effort is the historic exposure of Nigeria’s top oil companies linked to large scale corruption and their on-going trial in Italy and other European courts.

”We are therefore greatly alarmed – as are others in the international anti-corruption movement – by reports that Magu has been detained and/or suspended following allegations against him that were reportedly made by the Attorney-General of the Federation, Mr, Abubakar Malami (SAN).

The groups said the international community was not opposed to Magu being investigated since all allegations of corruption must be thoroughly probed.

But it alleged that due process and the proper disciplinary procedures have not been followed.

It added: “The procedures are clearly being hijacked by detractors of Magu in the political space and this is eroding the potential credibility of the outcome of the panel constituted to probe these allegations. The hounding of Magu through seemingly politically connected sponsored media harassment only makes matters worse”, the groups stated in the letter.

The coalition alleged that Nigeria’s image may be dented if the situation at hand is not well handled.

The groups said: “We have been hugely impressed by the dedication of its investigators and by the disciplined leadership shown by Acting Chairman Ibrahim Magu.

“The agency is completely different from the sclerotic, timid, politically captured bureaucracy that it was In the receipt period. The credit for this is due in large part to you for appointing Magu and sticking with him despite efforts to unseat him.

“The respect that Nigeria has gained is exemplified by the recognition accorded to Magu, not least by the US Federal Bureau of Investigation, which recently honoured him with an Award of Excellence.

“Indeed, in meetings we have had with this, and other agencies, conversations have often referred to the impressive current leadership of the EFCC.

“The Attorney-General of the Federation has apparently sought to bypass the usual administrative procedures of issuing a query to an accused officer under his ministry in favour of a political approach.

“The procedure risks severely denting Nigeria’s reputation abroad and urging the President to enforce a “zero tolerance to political interference” as recommended by the Edinburgh research group.

“We note that many of the allegations reportedly made by the Attorney-General of the Federation have already been investigated by same AGF under your instruction in 2017 and that Magu was exonerated in respect of the corruption allegations: only those related to insubordination were freshly leveled.

“We are concerned that accusations of “insubordination” risk crossing the line that ensures the independence of prosecutors from political interference. Despite bearing false witness being illegal, no-one has been investigated or charged in relation to bringing the false allegations against Magu in 2017.

“We realize that you have been placed in an invidious position by the AGF. However, we very much hope that you will find a way forward that protects the huge strides made by the EFCC under Magu’s acting chairmanship.

“We very much doubt if the Italian case on Malabu Oil Block (OPL 245) would have reached the stage that it has without his committed and diligent response to Mutual Legal Assistance requests. At this critical stage in the trial, his replacement for political reasons would be wholly regrettable and would only give succor to those being prosecuted.”