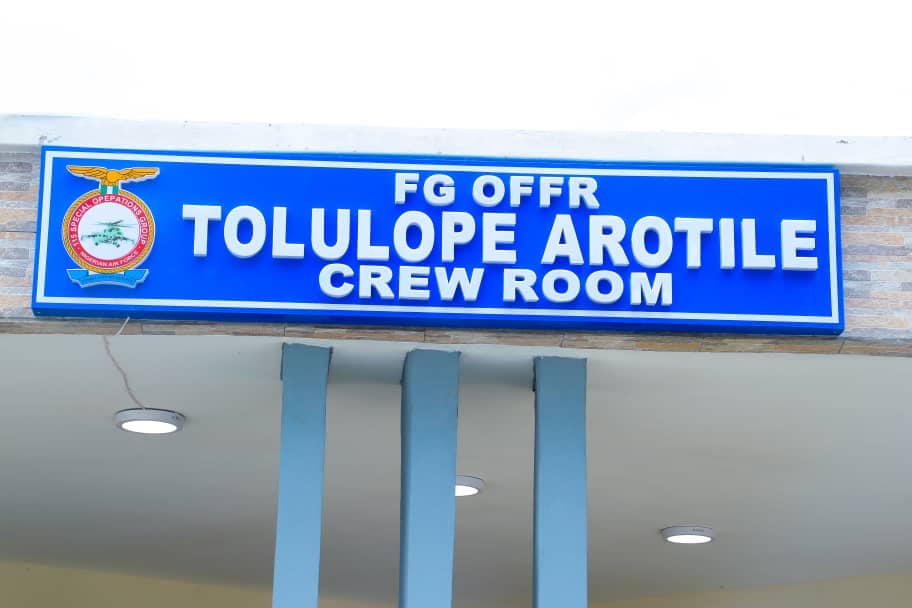 NAF IMMORTALIZES LATE FIRST COMBAT HELICOPTER PILOT, FLYING OFFICER TOLULOPE AROTILE, AS CAS COMMISSIONS INFRASTRUCTURAL PROJECTS IN PORT HARCOURT
In fulfillment of its promise to honour the memory of Nigeria’s first female combat helicopter pilot for her invaluable contributions to the fight against armed banditry and other criminal activities in the Country, the Nigerian Air Force (NAF) today, 22 September 2020, immortalized late Flying Officer Tolulope Arotile. The newly renovated and remodeled Pilots’ Crew ‘Room’ at the 115 Special Operations Group (115 SOG) Port Harcourt was named after the late officer who died on 14 July 2020 at the age of 24. The Pilots’ Crew Room houses an Operations briefing room, computer room/library, pilots’ life-support room and lounge as well as a kitchen, dining room, changing room for pilots on standby and several rest rooms. The facility was provided to ensure a conducive environment which would enable pilots to more effectively plan and execute assigned missions.
Speaking during the ceremony, which also featured the commissioning of a newly constructed Block of 18 x two-bedroom flats for Senior Non-Commissioned Officers (SNCOs) as well as a water project, the Chief of the Air Staff (CAS), Air Marshal Sadique Abubakar, stated that immortalizing late Flying Officer Arotile was done, not only to honour her memory but also to further inspire young girls in Nigeria to study, work hard and pursue their dreams and legitimate aspirations with pride and honour. “It is gratifying to note that, since late Tolulope’s demise, many young Nigerian girls have indicated their interest to join the NAF. Besides, no fewer than 12 other female officers, who have undoubtedly been motivated by her inspirational life and the unprecedented and exemplary contributions by other female and male pilots, are currently undergoing flying training, both within and outside the Country, to become NAF pilots”, the CAS said.
Air Marshal Abubakar noted that immortalizing late Flying Officer Arotile also addressed another area of the NAF’s policy thrust which is the commitment to assure personnel that their sacrifices would never be in vain. According to him, the policy has been sustained through the immortalization of personnel who paid the supreme price in service to the Nation. “The objective has always been to acknowledge their contributions towards securing our Country, while making sure that they and their sacrifices remain forever fresh in our minds and indeed in the minds of Nigerians”, he added. The CAS, who expressed excitement to see some of her colleagues who were at the commissioning to celebrate her memory, noted that late Flying Officer Arotile lives on in the hearts of those coming after her. He encouraged more young girls to aspire for career opportunities in the NAF as he said “there is no limit to what they can achieve”.
While expressing his happiness with the performance of the Commander as well as officers and men of the Unit, Air Marshal Abubakar stated that 115 SOG had continued to play a significant role in the NAF’s efforts at tackling insecurity in different parts of the Country. He noted that pilots, engineers, technicians and other support staff of the Group, deployed along with their helicopter gunships, had continued to contribute their quota towards winning the fight against insurgents in the North East as well as against bandits and other criminals in the North West and North Central. The 115 SOG, he said, had also continued to play a key role in dealing with illegal oil bunkering and pipeline vandalism in the South South, working in synergy with sister Services and other security agencies.
The CAS recalled that, over the years, 115 SOG had built in-house capacity and shown its capability in the conduct of the first-ever life extension maintenance on 2 x Mi 35P helicopters. Similarly, he said, the Unit, working with technical partners, was able to reactivate 3 x EC-135 helicopters locally. While charging the aircrew and other personnel in Port Harcourt to continue working harder to deal decisively with the enemies of the Nation, the CAS urged them to utilize the new facilities and other welfare projects with a high sense of responsibility.
Air Marshal Abubakar expressed his profound gratitude to the Commander-in-Chief of the Armed Forces, President Muhammadu Buhari, for his continued support to the NAF towards the achievement of its desired Air Power goals. He noted that the President’s overwhelming support to the Service was a testament to the fact that the whole Nation stands by the NAF in the fight against all enemies of the Country. “We therefore pledge to remain resolute in the conduct of our operations until peace is restored to every troubled part of the Country”, he said.
In his welcome address, the Air Officer Commanding (AOC) Tactical Air Command (TAC), Air Vice Marshal Olusegun Philip, noted that the CAS had proved beyond doubt that the welfare of NAF personnel was his topmost priority, as evidenced by his commitment to the provision of infrastructure for their comfort and optimum performance. While thanking the CAS for his constant support, the AOC reassured him of the firm resolve and dedication of personnel to the fight against terrorism, banditry and illegal oil bunkering. “I promise you that we will continue to give you the desired results in all our present and future operations”, the AOC said.
Also present at the ceremony were Branch Chiefs and Directors from the NAF Headquarters as well as the General Officer Commanding 6 Division Nigerian Army and other senior military officers. One of the key feature of the event was the presence of some NAF’s female pilots, including Flight Lieutenant Blessing Liman, the first female to be winged as a pilot in the NAF, as well as Flying Officers Genevieve Nwaogwugwu, Olubunmi Ijelu, Kafayat Sanni, first fixed-wing fighter pilot in the NAF, and Chinelo Nwokoye, NAF’s second-ever combat helicopter pilot.
IBIKUNLE DARAMOLA
Air Commodore
Director of Public Relations and Information
Nigerian Air Force
22 September 2020