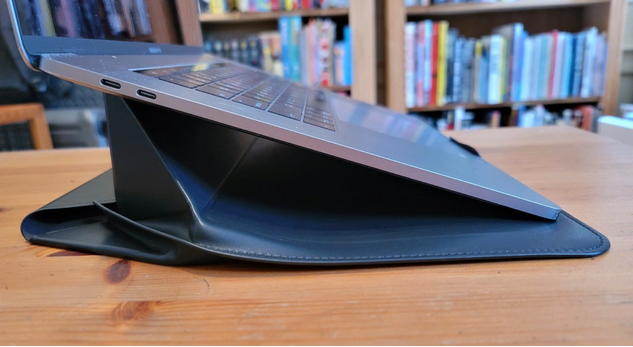 Moft is a clever company that makes clever products. For a while there, I was sporting their laptop stand. It was a head-turner when I used to unfold it during meetings — back when we used to do those in-person. The truth is, I ended up having to tear it off the bottom. It lasted fine for a while, but the heat from the bottom of my MacBook ultimately melted it into a gooey mess. It was fun while it lasted.

Ultimately, I do think that was a design flaw. But even so, Moft its one of those companies you want to see succeed and continue making interesting products that buck the traditional models of most accessory makers. I’m not sure I would purchase the convertible standing desk, for instance, but I’m glad it exists.

The Moft Carry Sleeve, on the other hand, is a bit more my speed. It’s yet another convertible stand from the company, but for starters, it’s one that doesn’t require any adhesive, so that’s a big point in its favor right there. Instead of relying on the sticky stuff, the convertible sleeve functions similarly to a number of origami tablet cases currently on the market. Basically it uses a combination of foldable corners and magnets to snap into different shapes.

Honestly, I think I dig it. As a laptop sleeve, it’s a little too bulky for my tastes. It’s a bit big for my backpack. But the build quality is surprisingly nice. It’s built of a realistic vegan faux leather that is more sustainable, scratch resistant and water resistant than the real thing. All good news. There’s a card slot and a little stretch neoprene rubber slot for expandable storage.

The case converts into a stand with a couple of folds, propping the laptop up at either a 15 or 25-degree angle, with a little “flap limiter” up front that keeps it from sliding too far forward. The company claims it can support weight up to 22 pounds. I’ve not tried, but my 15-inch MacBook seems all right so far. I guess we’ll see for sure when I start traveling again.

After all, the company’s name is an acronym for Mobile Office for Travelers. Clearly not a ton of business for that at the moment, but it’s already scored $300,000 on the Carry Sleeve Indiegogo, so there’s still interest, none the less.