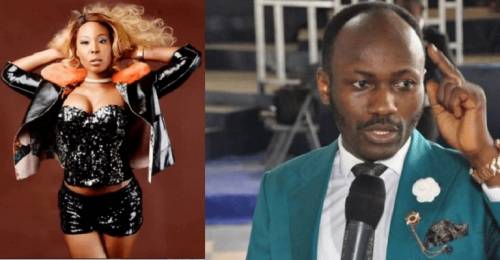 Davids in a video noted that he and Apostle Suleman both knew how they got Otobo to come to the church in Auchi, and apologise over the scandal and how they persuaded her mother too.

A former pastor of the Omega Fire Ministries, Mike Davids, who has accused the General Overseer of the church, Apostle Johnson Suleman, of sleeping with his wife, has said he will expose the truths behind the Stephanie Otobo’s sex scandal.

The case of Otobo, a Canada-based singer, came up in 2017 and 2018 when she accused Suleman of sexual relationship – a controversial scandal which rocked the church and attracted the attention of Nigerians for months.

Davids in a video noted that he and Apostle Suleman both knew how they got Otobo to come to the church in Auchi, and apologise over the scandal and how they persuaded her mother too.

Davids had accused Suleman of sleeping with his wife, Faith Edeko, who currently heads an Abuja branch of the church.

He said, “I left the church (Omega Fire Ministries) of my freewill. You were never the one who sent me out of that ministry. I was tired of your ungodliness as a leader. And that was the major reason I left that ministry. So, forget those manipulations and cheap lies.

“We all know the part I played in the Stephanie Otobo saga. You know as much as I do. How much involved I was in bringing that saga to a halt. I don’t even need to mention names. You knew how we got Stephanie Otobo to come to the altar and apologise to mama (Suleman’s wife) and brought Stephanie Otobo’s mother to Auchi.

“I am coming to that issue because you are pushing me to that extent, Apostle Johnson Suleman as much as I knew what happened. Thirdly, I am also aware that my account has been frozen. You have also released policemen to get me arrested.

In January 2018, a video had emerged appearing to show Stephanie Otobo, the alleged mistress of Suleman, who accused him of impregnating her and breaching a promise to marry her.

She later said she was paid to defame the pastor.
Ms. Otobo made a u-turn when she reportedly addressed the Omega Fire Ministries Worldwide congregation (Mr. Suleman’s church).

According to her, some “very strong and powerful politicians and pastors” deceived her.

The video of her confession had been posted on the church’s official Facebook page.

Ms. Otobo’s lawyer, Festus Keyamo, had said he could not confirm or deny the video.

“We saw the video online on Saturday morning but we are yet to get any formal statement from Stephanie confirming or debunking the video. We are lawyers and we only act on our client’s instructions. So, we don’t have any comment on the matter,” he had said.

Ms. Otobo who said she came to Nigeria from Canada with the intention to further her career, said she succumbed to the manipulation of the politicians and pastors because she was told it would help her career.

“They paid me a lot of money,” she said, wiping tears from her eyes.