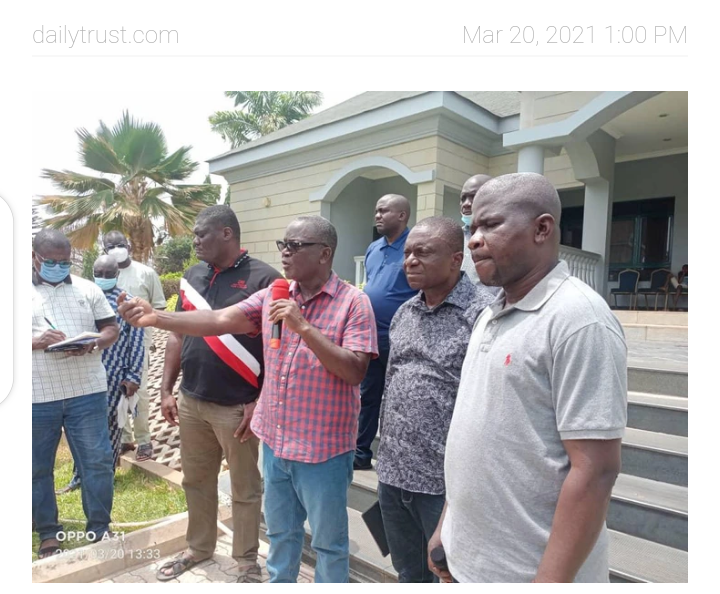 Governor Samuel Ortom has spoken about the attack on his convoy along Tyomu community in Makurdi Local Government Area of Benue State.

Daily Trust had reported how gunmen opened fire on Ortom’s convoy along the Makurdi–Gboko highway around 11am on Saturday.

Witnesses told our correspondent that there was a heavy gunfire between the attackers and the governor’s security operatives.

A local said, “I didn’t know what happened, but I heard terrible gunshots. There were also sounds of speeding vehicles and by the time I inquired; I was told the governor was ambushed by gunmen.”

Speaking with newsmen in Makurdi, the State capital, Ortom blamed the incident on herdsmen whom he said had earlier threatened to capture him alive.

He said he was returning from his farm situated on Gboko road when some gun welding men dressed in black stormed out of bushes and started shooting at his convoy.

It is normal for me as a farmer to go to my farm on Saturday. On my way back from my farm along Gboko road today, we started hearing gunshots. And we saw people dressed in black, they were Fulani herdsmen.

“They shot at us, but my security men were able to repel them, and we escaped unhurt. Nobody in my convoy was injured. From what I saw, they were more than 15 who came after us. They could be more than that,” he narrated.

‘Not the first attempt on my life’

Ortom, however, alleged that it was not the first time, the suspected herders have tried to kill him, noting that intelligence report available to him indicated that a group of herders in their general meeting held in Yola, Adamawa State, recently singled him out for elimination on grounds that he is working against them.

AHe added, “I heard I was targeted for elimination. This is not the first time. I heard intelligence report before now that they will kill my security men and capture me alive, then they will be killing me gradually. But, they have failed, they are not God and can’t kill me.

The governor further intimated that he has detailed his lawyer to immediately instigate a legal suit against the Myetti Allah Kautal Hore leadership because he believes the organization is behind the bandits who cause problem.

‘Security agencies have gone after my attackers’

He also said the matter had been reported to all security agencies for prompt action, adding that already security operatives, including the Operation Whirl Stroke (OPWS), have gone after his attackers.

He called on security agencies to fish out bandits going around with AK47 while obeying the orders of the president to shoot them at sight.

“If I can go to my farm as a governor with all my security men, then who else can go to farm in the state? Mr. President has said those found with AK47 should be shot at sight but I’m yet to see that happen.

“I call on the security agencies to fish them out. They are in the forest between Makurdi and Abinsi across the river. They are trying to eliminate me, and I have not done them any evil. They want to take over our land and I said no. I’m not a second-class citizen to anyone in this country.

“I can never compromise my fight for equity, justice and fair play. The anti-open grazing law of Benue state can never be repealed – that’s what my people said. If at all it is reviewed, then it would be an increment of fines for offenders,” Ortom maintained.