Could this invisible air shield protect fliers from Covid-19? 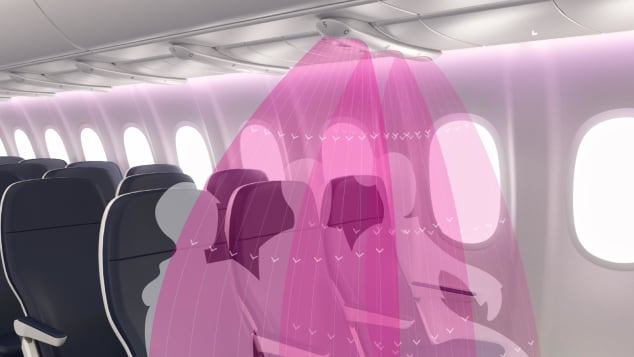 (CNN) — A simple device that fits on to the existing air vents inside an airplane cabin could help reduce the risk of inflight Covid-19 infections.Seattle-based technology company Teague says its new AirShield device enhances air flows that already help minimize the spread of germs on board, creating an invisible ‘shield’ around passengers.AirShield is a 3D-printed component that fits onto the Passenger Service Unit that you’ll find above each passenger in an airplane cabin. The unit usually contains a reading light and vents, known as air gaspers, which send air downward onto the seat occupant.Ordinarily, each passenger can control the direction and velocity of the air that’s blasting onto them in the same way that they can also decide if they want their light on or off.AirShield sculpts the flow into blades that ensure any respiratory droplets are retained within a single passenger’s space, and shouldn’t be breathed in by the occupant of a neighboring seat.

AirShield is a new, invisible germ isolation concept.Courtesy TeagueAnthony Harcup, senior director of airline experience at Teague, says that AirShield only enhances what’s already a pretty effective method of air flow on airplanes.”What a lot of people don’t realize, is that an aircraft is actually one of the safest places that you can be,” he tells CNN Travel.Normally, air on board a passenger plane is fed in through the top of the cabin and then extracted by floor vents to be fed through high-efficiency particulate absorbing (HEPA) filters that take out 99.9% of microbial content.This means the air that’s coming back through the gaspers is freshly purified.AirShield is the latest in a slew of designs, from snazzy reimaginings of the airplane middle seat to double-decker lie-flat seats that aim to reassure returning fliers in the wake of the pandemic.”There’s been such a huge amount of support, design and engineering support, to solve some of these problems,” says Harcup. “We’re all trying to get the public flying again, I think the sooner we can get people comfortable with flying, the better off the industry and the world’s going to be.”

AirShield directly covers the air gaspers above passengers’ seats.Courtesy TeagueAirlines have been rapidly losing money over the past few months, and Harcup notes they’ll be keen to implement ideas that help passengers feel safer, but don’t break the bank.On May 5, the International Air Transport Association (IATA), which represents carriers around the world, released a statement suggesting blocking off the middle seat was not something it supported.”Airlines are fighting for their survival. Eliminating the middle seat will raise costs,” Alexandre de Juniac, IATA’s director general and CEO, said in the statement.Related contentCan this airplane seat keep you safe from Covid-19?Harcup reckons Teague’s design — which doesn’t involve drastically reinventing the airline interior — could be more effective than models that cut out the middle seat. He calls social distancing on airplanes “somewhat of an oxymoron.””It’s an entire commercial model that’s built on densification,” he says of aircraft cabins.Harcup appreciates that passengers may feel more comfortable being distanced from their fellow travelers, but he reckons anxiety will be relieved by a greater understanding of how air flow works on airplanes.”I think products like this, things that don’t change fundamentally change layouts, densification commercial models, something that’s visible [… I think it’s going to really help bring people back to the skies,” Harcup adds.Related contentIs this double-decker seat the future of airplane travel?

AirShield received patent clearance earlier this month, so Teague is only just beginning commercial discussions with airlines and potential manufacturers.”So it’s a bit difficult to say what the cost of purchase or the cost of installation is going to be,” he says.Still, he remains confident Teague’s created a feasible, budget-friendly proposition for airlines — and he estimates flight testing could begin in three to four months’ time.”The whole point was that this would be really quick to make, certainly because we’re looking at 3D printing, we’re not going to be needing to wait for long lead times for tooling.”We’re not really reinventing the wheel, we’re harnessing and refining what’s already there.”Related contentCan this super-simple device stop virus spreading on airplanes?AirShield isn’t the only idea that reconsiders cabin air flow.Speaking to CNN Travel about airplane hygiene in April 2020, Qingyan Chen, a professor of mechanical engineering at Purdue University in Indiana, highlighted how droplets could be transmitted to fellow passengers before the HEPA filter has caught them.A couple of years ago, Chen proposed a new type of ventilation system that envisages a dedicated HEPA filter for each seat and tested the system in a seven-row section of a Boeing 737, to apparently successful results.