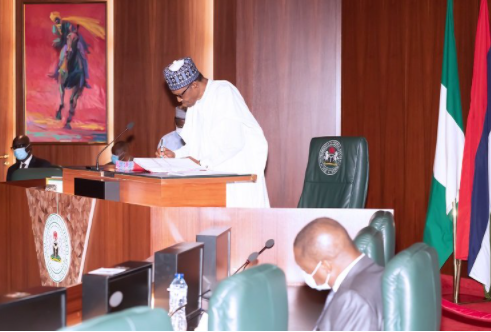 President Muhammadu Buhari has sworn in four newly appointed Permanent Secretaries of the Federal Civil Service.
The brief swearing-in ceremony took place on Wednesday, September 30, just before the commencement of the weekly virtual Federal Executive Council (FEC) meeting in the Council Chambers of the State House.

The four new Permanent Secretaries – three men and a woman – complete the list of 16 persons appointed in June, twelve of whom had been sworn-in more than a month ago.
Those sworn-in today include Mr James Sule from Kaduna; Mr Ismaila Abubakar from Kebbi; Mrs Ibiene Patricia Roberts from Rivers and Mr Shehu Aliyu Shinkafi from Zamfara.

The weekly virtual FEC meeting took off immediately after the brief swearing-in ceremony.