Doctors baffled as rare “two-headed” baby is born in Uzbekistan 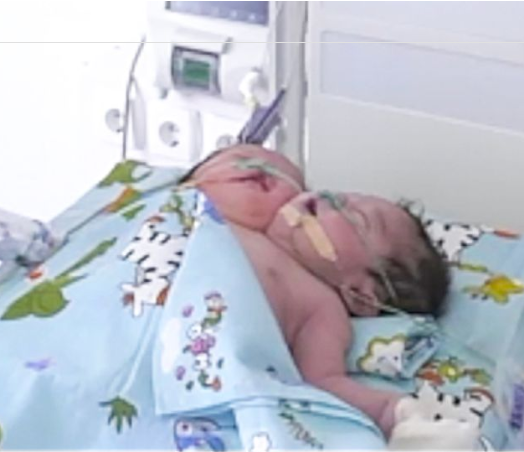 A “two-headed baby” is in intensive care after being born in Samarkand, Uzbekistan.

The baby, who has two heads with two sets of organs but only one genital organ, is fighting for survival.

According to doctors, the conjoined twins share one body, one genital organ believed to be male, but the baby’s internal organs are double in quantity. Doctors say it is a very rare, one in 200,000 or 220,000 cases.

Dr Dilshod Rakhmonov told local media that “using medical language, these are Siamese twins”  but he then referred to a single child.

“At the moment, the baby is in the intensive care unit of our centre,” he said.

“The baby’s internal organs are in double quantity, there is one genital organ, and, moreover, the newborn has two heads.

“But our case is a little more complicated, that is, the bodies have grown together into one.

“For this reason, we plan to conduct complex checks.

“Now the general condition of the child is not bad, measures are being taken to treat him.”

The doctor said the baby’s condition could be the result of a marriage between relatives or from radiation exposure.

One theory emerged that this is a case of Craniopagus parasiticus, an extremely rare type of parasitic twinning that occurs in between two and three cases in five million births.

He said the parents knew about possible conjoined twins before birth which was by Caesarean. They specifically refused an abortion, Dr Rakhmonov confirmed.

The mum is now under the supervision of doctors in the maternity ward.

Leading medics in Uzbekistan were being consulted and foreign experts would also be contacted to help the child.