Spain locks down an area near Barcelona with 400,000 people after spike in coronavirus cases just as Britons prepare to head out there on long-awaited summer holidays 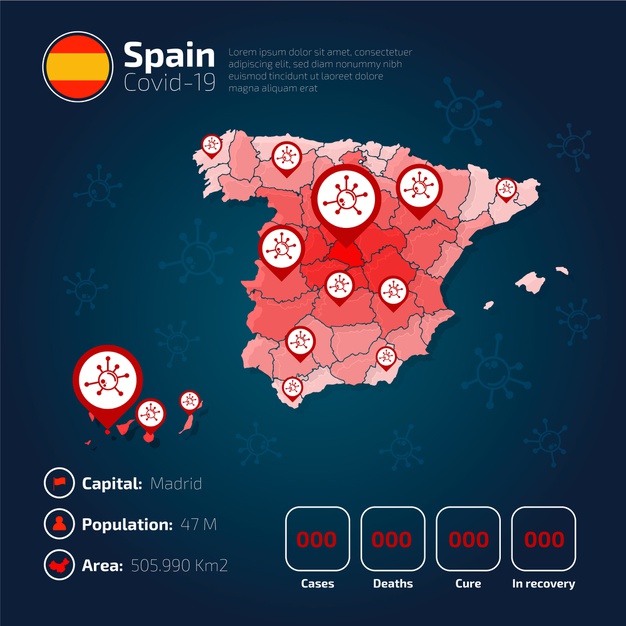 Spain’s Catalonia region has locked down an area of more than 400,000 residents from midday today

Spain’s Catalonia region has locked down a county of more than 400,000 people following a surge in coronavirus cases – just as Brits prepare to go there on holiday.ADVERTISEMENT

The western Catalan city of Lleida and the rest of Segrià county will be under lockdown from midday today.

‘We have decided to confine the del Segria zone following data confirming a sharp rise in COVID-19 infections,’ Catalonia’s regional president Quim Torra told reporters, adding that no one would be allowed to enter or leave the area.

It comes after England lifted restrictions to let Brits travel to the country on ‘air bridges’ – meaning holidaymakers won’t have to go into quarantine as long as they return to England on or after July 10.

‘We are taking a step back to protect ourselves and control the outbreak,’ said Torra, who described the measure as a ‘difficult decision.’

There have been 62,057 confirmed cases in Catalonia since the outbreak began, with 5,673 related deaths.

Miquel Buch, the Catalan interior minister, said anyone in Segrià county who wanted to leave needed to do so before the strict lockdown was imposed at 12pm.

He asked anyone in the county not to travel between towns and not to meet in groups of more than ten.

Any residents of Segrià currently on holiday or away from the lockdown zone need to make their way back by 4pm or risk being unable to get back to their homes.

Exceptions will be made for people returning from work elsewhere, or on a case-by-case basis.

Segrià county, an agricultural hotspot with a number of slaughterhouses, has faced a sudden jump in cases compared to the rest of the region.

Yesterday the figure jumped to 21 Covid-19 patients in regular rooms and six in the ICU, but the department of health denied they were going to lockdown parts of Lleida.

The situation became so serious the health emergencies service had to preemptively build a field hospital outside Arnau de Vilanova hospital – to treat up to 105 patients if needed.

The number of cases is not currently a concern, health officials said, but they want to curb the community spread before the virus becomes out of control.

On Friday, the ministry of health announced 276 newly confirmed Covid-19 cases in the previous 24 hours, 60 of which came from Lleida. Many of those affected are believed to be seasonal fruit pickers.

Last week, 167 new cases were confirmed, but this week the figure doubled to 325.

‘The virus is being transmitted, we really want to flatten the curve in Lleida,’ Ms Vergés said during a press conference on Friday.

comes after a Covid-19 outbreak was found by the Catalan health department last month in Lleida’s Castrillón care home.

Tests found five workers and 13 elderly persons were positive. Four people had to be hospitalised.

Spain’s mortality rate had recently returned to normal compared with the same period over the previous five years, with no excess deaths since 18 May.

Some 174 infections have been diagnosed in the country in the last 24 hours, an increase compared to yesterday when 134 were registered. In total, 250,545 have been infected.

After almost 100 days of confinement, Spain had reached the so-called new normal.

Restrictions were lifted and borders with the EU and 15 non-Schengen area countries were opened.

Arrivals from the UK don’t have to self-isolate on arrival but will have to wear face masks on public transport and public spaces where it is not possible to maintain a five-foot distance.

Travellers from England can now visit 73 destinations with no mandatory quarantine upon their return from July 10 – including France, Italy, Spain, Germany, New Zealand, Malta and Barbados.

In Catalonia, the government had given individuals the responsibility to avoid contagion. The restrictions on capacity in bars and restaurants, both indoors and outdoors, no longer applied but venues did have to ensure a distance between people of five feet.