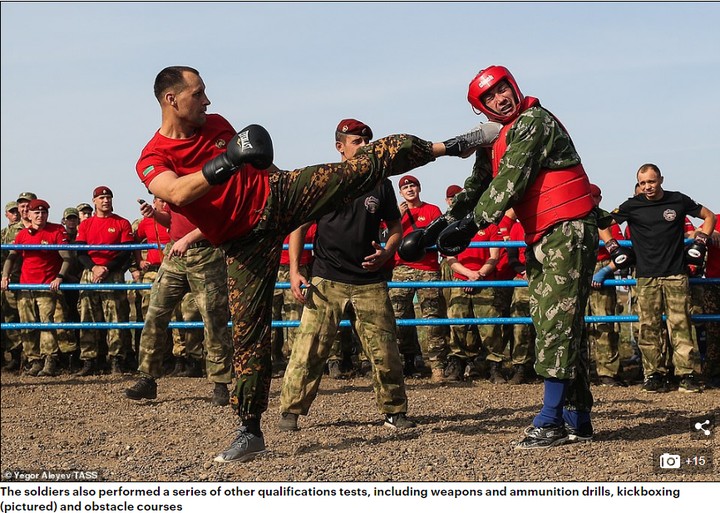 Russian soldiers have been captured slugging it out in a gruesome boxing fight as part of their qualifications for a special forces beret in a spectacular set of photos.
Volga Federal District’s National Guard special forces servicemen took part in the gruelling test to earn a crimson beret today.
Striking pictures show the men battering each other’s faces bloody at the Bars training ground in the Republic of Tatarstan, southwest Russia.
The soldiers also performed a series of other qualifications tests, including weapons and ammunition drills, kickboxing and obstacle courses.
They hope to earn a crimson beret, worn by elite members of the Ministry of Internal Affairs (MVD) Spetsnaz units. It is referred to as ‘krapoviy’.
The special annual exam to earn the honour of wearing the beret was devised by Sergei Lysyuk, a former commander of the elite Vityaz special forces unit of the MVD.
He told Russia Beyond: ‘It all started when I read the book “Alpha Team” by Miklós Szabó, a former US special forces soldier.
‘There, the right to wear the green beret was earned by a gruelling test, with blood and sweat.
‘The book made a very strong impression on me and led me to think of establishing a test for my division, for the right to wear a crimson beret that was not simply a hat, but became a symbol of a highly qualified Spetsnaz commando.’
The programme, including special physical and tactical training, has been used in all Spetsnaz units of the Interior Ministry troops since since May 31, 1993.
Soldiers must go through three stages : a physical fitness test, a weapons and ammunition test, and a final ’12 minutes of hell’ round, which is split into four periods of hand-to-hand combat with a crimson beret opponent.
The physical fitness stage involves a five-mile run through rugged terrain, including chest high stagnant water, minefields and areas surrounded in smoke and fire.
It is accompanied by mental battery from a group of ‘psychological manipulation’ soldiers who shout at the runners and throw mud and smoke puff charges at them.
The weapons stage requires soldiers show skill in firing an RPG-7 anti-tank grenade launcher, the AGS-17 automatic grenade launcher, PK or PKT machine guns, the AK74M automatic, Makarov or Stechkin pistols and the SVD sniper rifle.
Finally, the soldiers have to fight an existing crimson beret wearer to earn the right to wear their own.
Source: https://www.dailymail.co.uk/news/article-8794887/Russian-soldiers-fight-qualify-special-forces-crimson-beret.html
(