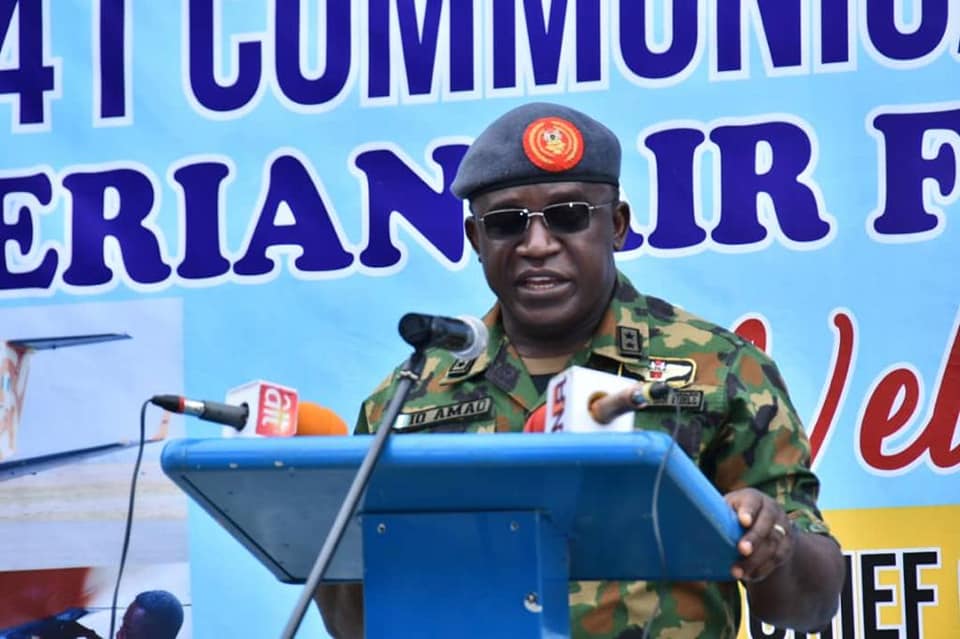 NAF COMMISSIONS NEW RESIDENTIAL ACCOMMODATION FOR PERSONNEL AT 041 COMMUNICATIONS DEPOT SHASHA LAGOS
In furtherance of efforts aimed at enhancing the welfare of its personnel, the Nigerian Air Force (NAF) today, 7 October 2020, commissioned a newly constructed block of 30 x single room transit accommodation for airmen/airwomen at the 041 Communications Depot (041 Comms Depot) Shaha, Lagos. While commissioning the accommodation, the Chief of Air Staff (CAS), Air Marshal Sadique Abubakar, who was represented by the NAF Chief of Policy and Plans, Air Vice Marshal Oladayo Amao, emphasized that conducive home and work environments are essential for effective service delivery. He noted that the NAF, in its commitment to improving the welfare of personnel for enhanced productivity, would therefore sustain efforts to ensure that all personnel are properly accommodated.
Speaking further, the CAS, while admonishing the beneficiaries to use the new accommodation responsibly, urged them to do their best to justify the funds expended by the Federal Government to enhance their welfare. “As a Service, we must also strive to continuously meet and exceed the expectations of the Nation by protecting the citizenry and our critical assets as well as bringing succour to those in despair as we discharge our constitutional responsibilities to the Nation”, he added. The CAS seized the opportunity to express his profound gratitude to the Commander-in-Chief of the Armed Forces of Nigeria, President Muhammadu Buhari, for his commitment towards improving the welfare of personnel of the Service for enhanced professional performance. He equally expressed his appreciation to the National Assembly, especially the Chairmen and Members of the Senate and House Committees on Air Force, as well as the Honourable Minister of Defence, for their immense support to the Service.

Earlier in his welcome address, the Commander 041 Comms Depot, Air Commodre Nkem Aguiyi, remarked that the Depot, like many other units in the Service, had benefited immensely from the infrastructural development drive of the current NAF Administration. He noted that among the numerous new projects executed in NAF Base Shasha since 2015 included the establishment of a new secondary school, the Air Force Secondary School (AFSS) Shasha, in June 2017, as well as the construction of 2 other blocks of 30 x single room airmen’s transit accommodation, a block of 18 x 2 bedroom accommodation for Senior Non-Commissioned Officers (SNCOs) and a well-furnished and equipped Mess for airmen. Others, he said, were the construction of an assembly hall at AFSS, 2 blocks of 6 x 3 bedroom flats for married officers, construction of drainage system to address perennial flooding on the Base and surrounding communities, provision of 2 x 500 KVA transformers as well as the expansion of the Depot Medical Centre to incorporate an Operating Theatre, X-Ray Department and standard Medical Laboratory, amongst others.