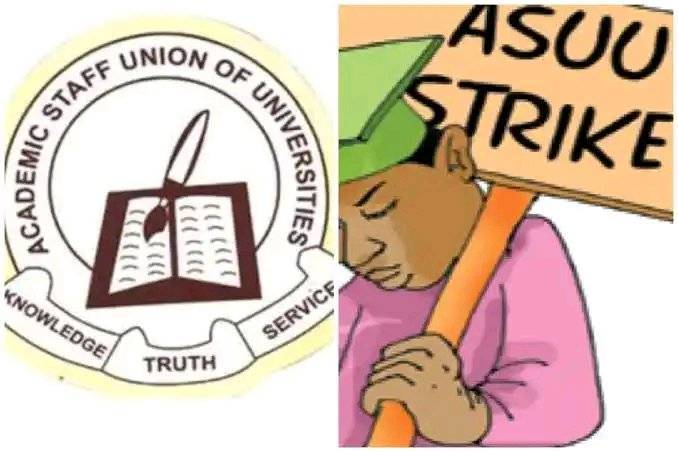 Confirm That They Have Been Invited For Negotiation.

ASUU To End Strike as the Union Hope On Positive Outcome From Meeting With FG. The Academic Staff Union of Universities (ASUU) has assured students that the Union hopes for a positive outcome with its meeting with the Federal government consisting of the Current Minister Dr. Chris Ngige as Minister of Labour and Employment and Festus Keyamo as the Minister of State for Labour and Employment. The Minister for Labour says there are working harder to end the strike.

The Senior Staff Association of Nigerian Universities (SSANU) and the Non-Academic Staff Union of Universities (NASU), on Friday, asked its members to commence a 14-day warning strike. The directive was given by the Joint Action Committee (JAC) of the two unions in a statement.

The statement was jointly signed by Prince Peters Adeyemi for NASU and Comrade Samson Ugwoke for SSANU and NASU asked members to embark on the warning strike beginning from 5th to 19th, October 2020.

According to the unions, the strike had become necessary due to the inconsistencies of the Integrated Payroll and Personnel Information System (IPPIS) in the payment of salaries of members of the two unions.

The statement read,” Following the recent directives from the National Universities Commission to Vice-Chancellors for immediate resumption/safe reopening of universities you are hereby directed to commence a 14-day warning strike effective from 5th to 19th, October 2020.” Among the demands of the unions are ‘Non-payment of Arrears of Earned Allowance being owed NASU and SSANU members despite various Memoranda of Understanding; non-payment of arrears of national minimum wage to members; non-payment of retirement benefits to outgone members and lack of seriousness by government in the renegotiation of 2009 FGN/NASU and SSANU agreements.

Others include usurpation of the headship of non-teaching units by academic staff in violation of conditions of service and establishments; neglect and poor funding of state universities, corruption in the university system and none constitution of Visitation Panel for the universities in line with the laws.

NASU and SSANU said the 14-day warning strike is a prelude to a full-blown, total and indefinite industrial action if the demands of the unions are not properly addressed.

ASUU Calls for Adoption of UTAS Before Suspending Strike.

‎The Academic Staff Union of Universities (ASUU) has called for the adoption of the University Transparency and Accountability Solution (UTAS) in the country.

The Kano Zonal Coordinator of the association, Mahmud Lawan, made the call in a statement issued in Kano on Thursday at the end of its meeting held at the Federal University, Dutse. The federal government had directed university lecturers to enroll on the Integrated Payroll and Personnel Information System (IPPIS).

The union, however, rejected IPPIS insisting that it violated the university autonomy, and proposed UTAS as alternative to the IPPIS. ‎‎‎Mr Lawan said that the union expressed dismay over non payment of salaries to its members by the government.

“We urge the federal government to immediately release the salaries of our members and stop playing politics with the ongoing six month old industrial action.‎

‎”The misinformation regarding payment of salaries by government officials is disheartening and laden with mischief to discredit the noble course of ASUU and its members,”‎ Lawan said in the statement.‎ The statement urged the federal government to investigate the matter, noting that payment of salaries to its members were suspended in the past three months. It also called for the provision of revitalisation fund, completion of renegotiation exercise and adoption of UTAS, to end the strike.‎

Sequel To The Schools Resumption Date Announced Earlier By The Federal Government Of The Republic Of Nigeria.

Students in Higher institution will have to wait for their respective managements to announce a specific date. A memo will be released from the school.

Let’s make this clear, Some Headlines are Saying “FG reopens all Schools” while some say “FG reopens Unity Schools”

It’s important to know that Unity schools are Federal Government schools that were created to promote unity among young students. Now Reopening of Unity Schools as announced By the Minister are for Federal Government Colleges, federal technical schools, e.t.c

We hope we have been able to make things clear.

According to the minister, schools across the country, are at liberty to fix resumption dates and ensure adequate safety measures. Adamu warned that schools who fail to adhere to outlined COVID-19 safety protocols, risk closure if there is an outbreak from such institutions.

He said, “We have consulted widely with all stakeholders in the education sector. Our eyes and ears are opened to the international media. “I’m glad to report that there has not been any single case of COVID-19 in all Unity Schools. No single fatality among the students.

“We have come to the conclusion that we have to review our decisions. After consultation with PTF, we have resolved that our Unity Schools be opened on October 12, 2020.”

The decision to reopen the schools was reached at the State Executive Council Meeting on Wednesday September 30, 2020 presided over by Governor Hope Uzodimma. The resumption is however subject to the adherence to the recommendations by the Committee responsible for ensuring that Covid-19 safety protocols headed by the Deputy Governor of Imo State, Prof. Placid Njoku.

Commissioner for Information and Strategy, Declan Emelumba who briefed the press also stated that the Council gave approval for the Imo State School system to be fully automated and digitalized to capture pupils and students enrollment; teachers, pupils and students personal data; payment of school fees; examination details and other relevant information concerning schools in Imo.