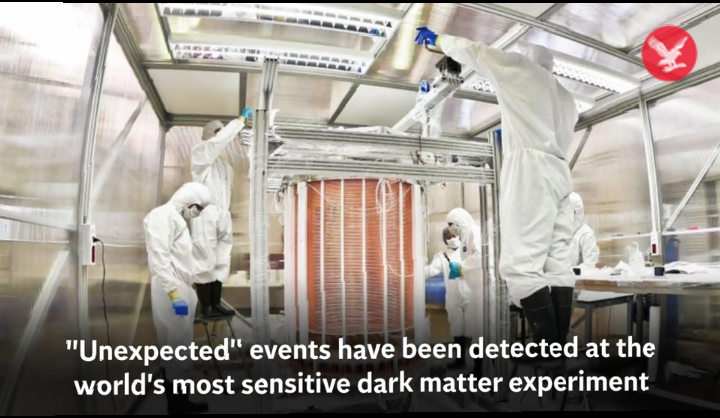 “Unexpected” events have been detected at the world’s most sensitive dark matter experiment.

Researchers do not claim to have found dark matter, but they say that there is an as yet unexplained and unexpected rate of events found in data from the experiment, and that they do not know the source.

The new breakthrough could be a sign of an entirely newly discovered kind of particle, or unpredicted behaviour that may require us to fundamentally change our understanding of physics.

The results come from the XENON collaboration, which brought together researchers from across the world who were attempting to detect dark matter. It did so using an experiment known as XENON1T, which was located deep underground in Italy.

Seeing evidence of dark matter would be one of the biggest possible breakthroughs in science. Though it is though to make up 85 per cent of the matter in the universe, it has never been detected directly.

The XENON1T experiment aimed to find them by filling a detector with 3.2 tonnes of ultra-pure liquefied xenon, a chemical element. If a particle passes through that xenon, it creates a tiny flash of light – since most of those interactions occur from particles that are known to exist, scientists are able to predict how many there will be, and any excess ones would be evidence of some unexpected physics.

Scientists expected to find 232 such events as they looked through the data from the experiment. But in addition to those they found a “surprising excess” of 53 events, which would not have been predicted in the data.

There is no definitive answer to the question of where those flashes are coming from. But some of the leading explanations could offer a new insight into some of the most profound question of physics.

The flashes could for instance be the result of the existence of a new particle, the scientists say. The excess events is roughly in line with those expected to be seen from hypothetical particles known as axions, which can be produced in the Sun.

Solar axions are not dark matter candidates, and their discovery would not be evidence that it exists. But it would be the first time that scientist have ever detected this class of new particles, and finding them could lead to new discoveries about fundamental physics as well as astrophysical phenomena, they say.

What’s more, solar axions in the early universe have been proposed as the source of dark matter, and so their discovery could help us understand how that mysterious substance came out.

That is the most likely explanation, the scientists say, given that the excess events observed are in line with what are expected from solar axions. There is a roughly one in 5,000 chance that the results would be a random fluctuation rather than lining up with this hypothesis – but other explanations are similarly statistically significant, the researchers say.

Otherwise, the excess events could be the result of neutrinos, trillions of which are passing through us and everything around us ever second. The result could be an indication that our understanding of the characteristics of those particles is wrong, a discovery that may require new physics to be explained.

Perhaps the most pedestrian explanation would be an unexpected new kind of background noise, caused by the detector having more of an isotope known as tritium inside than expected. It would only need a tiny number of such atoms to be present in the detector to explain the excess – but such an amount would also be so small that it is not possible to detect whether it is there or not.

Scientists are currently upgrading the XENON1T experiment to its next phase, known as XENONnT. That will have a much larger amount of active xenon in its detector, as well as a lower background, allowing for cleaner data.

Researchers hope that future work can help explain whether the unexpected events are coming from a contaminant in the detector, a statistical fluke – or a particle or behaviour that has never before been detected, or even explained by current physics.