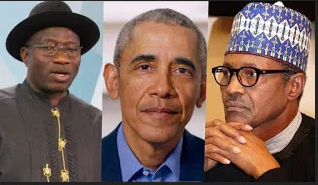 Former President Goodluck Jonathan giving an insight into how the Obama administration meddled into the 2015 elections in Nigeria and gave tacit support for Buhari!

Speaking in an Interview, He said: “The level of Interference by the Obama’s Government was very overwhelming. Its not as if i couldn’t have worn the election even with that, but if by my own thinking and also the way some other people look at it, it go outside the normal diplomatic relationship, the we should mention it.”

Recall that the US secretary of state visited Nigeria before the 2015 election. Goodluck Jonathan believes that this went beyond normal US Protocol.

“Sending that person to Nigeria on the eve of the election after Obama even issued a statement directing Nigerians to vote for the next chapter, that tells you something, and we should not sweep this under the carpet.”

If a foreign country, whether African country or America or any other country interferes with our election, we should mention it.”

Goodluck believes the kidnap of the CHIBOK GIRLS was Politicised

He continued; “Immediately the Chibok Issue came up, we expected Nigerians to be concerned: ‘How do we get these girls out?’

Within a couple of days, we saw people going to the US with bring back our girls placards, How?, why?, and of course Mrs Obama received on of those placards”.

“I cannot take responsibility for the abduction. I don’t control Boko Haram, they are criminals, But as a president of course you know it is not he president that goes to the fields. We have security and intelligence officers that do the work.

“Let me admit that yes, maybe they do their best, but their best was not good enough for us to recover the girls, that does not mean that i am trying to remove myself from any blame. Yes, I may not be blamed for the action, but i could be blamed that my security and intelligence systems were not strong enough to be able to rescue the girls.” He added.