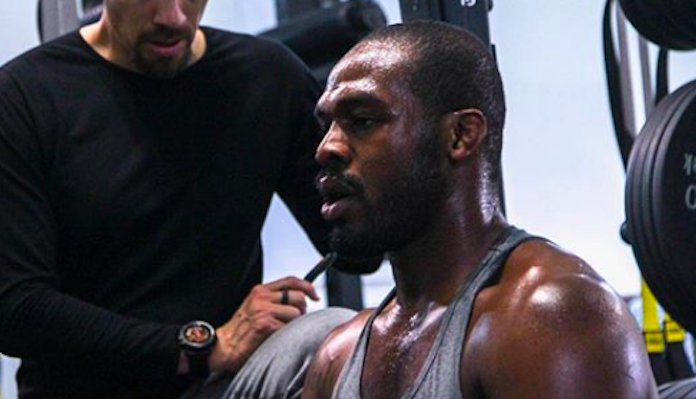 UFC superstar Jon Jones said that he weighs 255lbs in his latest heavyweight weight update ahead of the potential Francis Ngannou superfight.

HiJones has been bulking up for the better part of the past year in preparation for a planned move up to the UFC heavyweight division. Though he fought his entire MMA career up to this point at 205lbs, Jones has apparently had no trouble putting on the weight as he steps up to the UFC’s heaviest weight division. In February, Jones posted a video of himself hitting pads with striking coach Mike Winkeljohn when he weighed in at 252lbs. Some fans felt that Jones looked slow at that weight, but he fired back saying he was still getting into shape. Then in March, Jones posted an update saying he was weighed in around 245lbs.

It appears as though Jones has now put on a little extra weight since the last time he gave us an update. In an Instagram story posted this weekend, Jones poked fun at his daughters for losing a race to a 255lbs man who had his boots on. Check it out below.

It will be interesting to see just what weight Jones comes in at if he does fight at heavyweight as planned. It’s worth noting that Ngannou came in at 263lbs for his recent victory against UFC heavyweight champion Stipe Miocic, who weighed in at just 234lbs for that fight. We already knew Jones would weigh around that 250lbs mark just based on his recent videos, but perhaps he will want to put on a little extra weight against Ngannou given how physically strong he is. It would be really something if Jones decided to put on even more bulk than he already has and decides to come in at an even higher weight.

Do you think Jon Jones should get up to the heavyweight weight limit of 265lbs or should he stay in the 250lbs range.