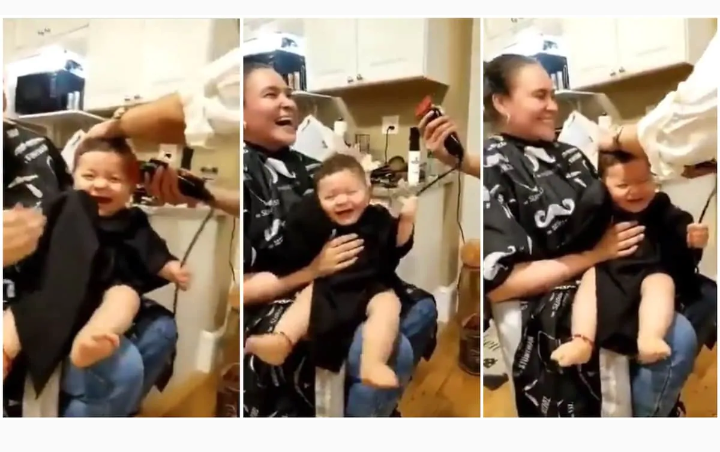 The video of a baby getting a haircut has gone viral after he reacted funnily to the sensation of the clipper on his head – Instead of the baby weeping as some do, he grabbed the clipper’s wire as he kept laughing – Both the barber and his mom joined in as they were equally stunned by his reaction.

Babies are really cute funny beings. No wonder their reactions (when not in pain) always get people laughing. An unnamed baby has become a sensation on Twitter after a video of his reaction at a barber salon taking a haircut in the presence of his mom went viral.

His response to the clipper on his head was quite unlike some babies who always fear the sharp blade of the clipper on their soft scalps. He rather burst into pearls of laughter.

People present were stunned at his response. Whenever the clip scrapped a portion of his hair, the baby would double up in laughter again, grabbing its wire. While no one could place what exactly he was reacting to, one could only guess the vibrating sensation of the clipper tickled him. See the video below:

A collage showing the baby during the haircut. Twitter/@cctv_idiots Source: Twitter Reactions have poured in and many described the baby’s joy as the cutest thing ever. Below are some of the reactions to the video: @Aroojkhurshido8 said: “Oh my God ! So cute! May Allah always keep him like this, amen!” @Vtobon_ said: “The cutest thing hahahaha.” @deanBarry said: “This is exactly what I do getting a trim. Last time took 3 damn hours.” @bigphil321 said.