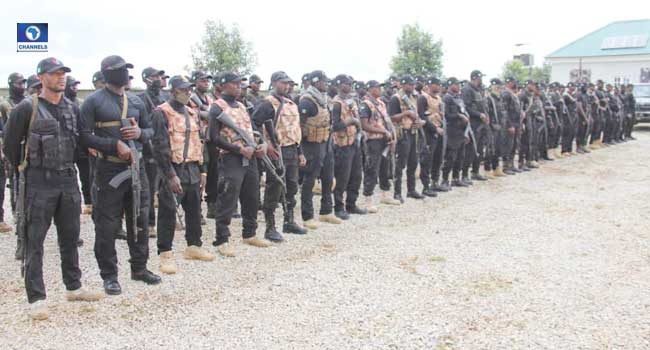 Troops of the Special Forces deployed by the Defence Headquarters arrive Southern Kaduna on August 14, 2020.

The Special Forces approved by the Defence Headquarters to halt the senseless killings and restore peace in Southern Kaduna have arrived Kafanchan ahead of their deployment to the various flashpoints in the area later today.

The Special Forces were drawn from the Nigerian Army.

They were received at Sector 7, the headquarters of Operation Safe Haven, by the Kaduna State Commissioner for Internal Security and Home Affairs, Mr Samuel Aruwan.

Addressing the troops, the Commissioner charged them to take the battle to the bandits and ensure that peace and security are restored to southern Kaduna.

He also thanked the Defence headquarters for graciously approving the deployment of the troops to Southern Kaduna, and however, assures the support and cooperation of the state government in making the operation a huge success.

Aruwan also called on non-state actors, especially residents of the affected communities to give their maximum support to the troops during the period of the operation through intelligence sharing mechanism.

Kaduna has been experiencing a series of attacks with a recent one carried out four weeks ago.

On July 19, 21 people were killed while 28 others sustained various degrees of injuries when gunmen attacked Kukum Daji Village of Kaura Local Government Area of the state.

According to the President of the Community, Mr. Yashen Titus, the gunmen suspected to be herdsmen, invaded the venue of a wedding party in the community at about 10 pm.

Similarly, on July 7, no fewer than 38 persons lost their lives in separate attacks on two villages in Sanga Local Government Area of Kaduna state on July 7.

The Council Chairman, Emmanuel Adamu, who confirmed the attack, said the gunmen unleashed mayhem on Ankpon Village in Nandu and Kabamu Village in Fadan Karshi, all of Numana district.

While describing the incident as unfortunate, he said the gunmen killed 38 persons including women and children.