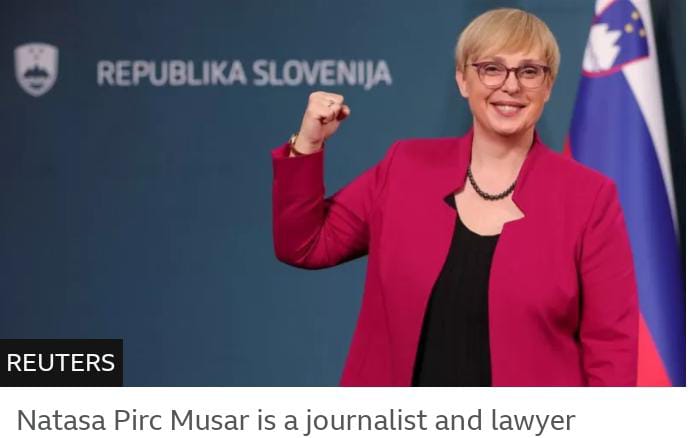 Slovenia has elected its first female head of state, a lawyer linked to former US First Lady Melania Trump.

Natasa Pirc Musar is a lawyer and journalist who ran as an independent with the support of Slovenia’s center-left government.

According to the election commission, Ms Pirc Musar received nearly 54% of the vote, while Mr Logar received slightly more than 46%.

According to the commission, 49.9% of the population of around two million voted.

“Slovenia has elected a president who believes in the European Union, in the democratic values upon which the EU was founded,” Ms Pirc Musar said following her election victory.

She stated that the world is “facing difficult times due to climate change.”

“Young people are now putting it on our political shoulders to take care of our planet so that our next generation, our children, can live in a healthy and clean environment,” she said.

The president’s role is mostly ceremonial, but Ms Pirc Musar will be commander in chief of the armed forces and will appoint several top officials, including the governor of the central bank.

During her husband’s presidency, Ms Pirc Musar was hired as a lawyer to protect Mrs Trump’s interests as she was born in Slovenia.

Ms Pirc Musar and her client sued Suzy magazine in Slovenia in 2016 for implying Mrs Trump worked as a high-end escort while pursuing her international modeling career. A settlement was reached outside of court.