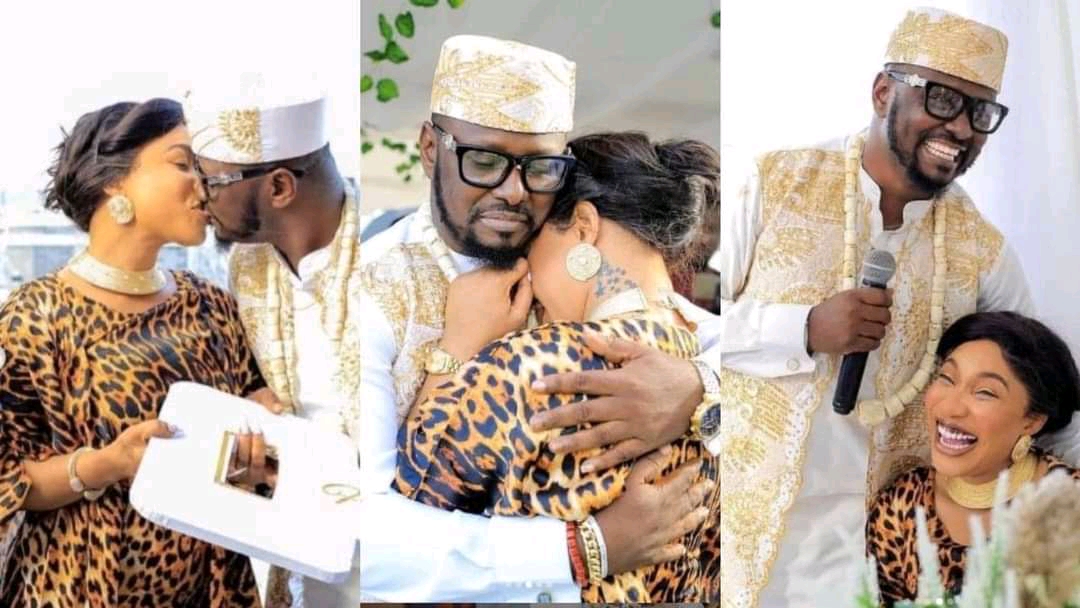 Tonto Dikeh, the Nollywood actress, has been heard in a leaked audio recording begging Prince Kpokpogri, her estranged lover, not to quit their relationship.

The pair has been in the public eye in the past few days amid speculations that they have parted ways — less than three months after they made their affair public.
They also unfollowed each other on Instagram recently, further strengthening claims of their rumoured split.

But in the less nine-minute clip obtained by TheCable Lifestyle on Tuesday, Kpokpogri was heard saying he could no longer put up with the actress in the relationship.
“Why do you think walking away will not give more peace? No, you can’t give me peace. See let me tell you ehn, from day one, it was not even up to two weeks when we started having crises,” he said.

“Can’t you see it yourself, a relationship that is not up to three months, yet you see the crisis…It’s like you don’t know me, I am a very peaceful person, anything that will threaten my peace, I will just run away…
“I told you that right from day one that babe please oh, I’m a very peaceful person. Even as it is my now, my aunty will say we don’t have anybody here in Abuja. I’m the only family they have in Abuja.

Read Also. BBNaija: Nini and I do things under the duvet, but she denies me in public – Saga (picture+Video)

“I cannot even bring my cousin to come and stay with me, because the next thing is they will come and tell you she is my girlfriend and the next thing, everywhere will be on fire.

“Please, I just want that peace so everyone around me can be happy. Where is Captain Nosa today with all the money? I don’t want to die young, anything that will break or destroy my peace, I don’t want it.”

Dikeh, however, appealed to the politician to rescind his decision amid tears. She also promised to “give him peace” if given a second chance.
“Please, how much more do I need to keep begging you to be with me. I am so exhausted, please. I can give you peace,” she pleaded.

But Kpokpogri insisted on quitting the relationship, saying the film star’s tears cannot reverse his decision.
“You don’t need to cry because you caused all these things, I told you right from day one. If I had not told you, that would have been a different thing, I told you,” he said.
‘Don’t leave me’ — Teary Tonto Dikeh begs estranged lover in leaked audio

CHEATING ALLEGATION AGAINST DIKEH
During the conversation, Kpokpogri had alleged that a man slept in the same room with the actress, citing a chat on Dikeh’s phone.
“A man came to you 2:30 am in the morning, he told you I’m at your door, there was no communication again till past 8 in the morning and you are asking me to think otherwise,” he said.
But Dikeh countered his claim, saying the unidentified man did not sleep in his room.

“If he slept in my room, will I be saying good morning by 8 o’clock. Would he be saying that if he slept in my room? I have told you the truth, I have told you my truth, nothing happened but if you want to do this your way…,” she said.
Not convinced, Kpokpogri had queried why the actress deleted the messages from her phone if she knew nothing transpired between her and the man.

‘I CAN’T WITHSTAND LOSING YOU — PLEASE DON’T LEAVE MY SON’
Sensing that Kpokpogri was unmoved by her plea, the actress again broke down in tears, pleading with the politician not to leave King Andre, her son.

“I know you have heard this before but I cannot stand to lose you, and if you cannot take me back, I swear I don’t know how to convince you but please, I’m going to beg you to take care of my son for me,” she said.
“Just take care of my son for me. Just do this one thing for me, don’t let his father come back to him, just take him like your own, please do everything you can to please, raise him like your own.

That’s all I’m going to say to you.
“I’m tired, my heart is tired, my whole being is tired since I walked into your door, I have been made to feel like I’m nobody, I am somebody, I’m a human being and because I love you so much doesn’t make me less a human being.”
Kpokpogri, however, tackled her for attempting to end the discussion, saying “you said we should talk so why are you walking away from the conversation?”

In her response, Dikeh said she decided to bring the conversation to a close because “I can’t convince you”.
She also told the politician, “you’re going to hear about me!”

Her response further ignited a mild drama between the pair as Kpokpogri accused the film star of attempting to blackmail him with suicide.

“Let me tell you something, this thing you’re trying to do is what they call blackmail. If I wanted to give you a second chance, because of what you have done now, I won’t do that because I can see you are blackmailing me with suicide,” he said.
“What is the essence of telling me to go closer to King, I should not allow his father go close to him? So, you want to go and kill yourself? Go and kill yourself na.”

But replying, Dikeh said her comment was not to blackmail him but as a result of the uncertainties surrounding her condition.
“I’m not blackmailing you, I’m tired of life already, it’s not about me, I can’t blackmail you. I just said you should take care of him (King). I don’t know what the statement means myself,” she added.

I wouldn’t have wanted it any other way if I hadn’t given birth in my bathtub.