A Wild Albino Camel In China, First Of Its Kind, Caught On Camera (Pics) 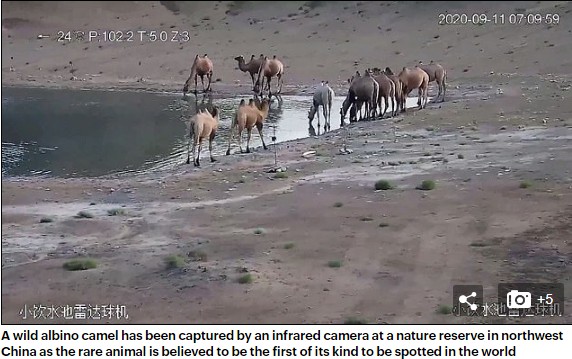 A wild albino camel has been captured by an infrared camera at a nature reserve in northwest China as the rare animal is believed to be the first of its kind to be spotted in the world.
Footage shows the animal with its all-white skin drinking from a puddle with a dozen brown camels at the Annanba Wild Camel National Nature Reserve in Gansu Province.
The camel is said to be a Bactrian camel, a critically endangered species, and aged about three to four years old, according to the staff at the Chinese nature reserve.
China has previously found a wild camel with white lips in Xinjiang’s Lop Nur. But the one captured on camera on September 11 is perhaps the first of white-skinned camel spotted in the world, a staff member from the Gansu reserve told Chinese media.
The rare albino camel is seen in the footage walking around the area with a dozen brown-skinned camels as they stopped to drink from a puddle.
The reserve said that the animal’s white skin was visible because the camels were shedding their fur during this time of the year. It remains unknown if the albino camel’s fur would also be white once it’s grown out.
Researchers are also determining whether the camel’s condition is caused by gene mutations or external influences, a staff member told Pear Video.
Located between the Kumtag Desert and the Altun Mountains, the Annaba reserve is a habitat for about one-third of the total population of wild camels in China.
The Bactrian camel, also known as the Mongolian camel, is a large even-toed ungulate native to the steppes of Central Asia. It has two humps on its back, in contrast to the single-humped dromedary camel.
It is listed as critically endangered on the Red List of Threatened Species by the International Union for Conservation of Nature.
The spotless, red-eyed animal was photographed while trekking through the forest in April 2019 at the Wolong National Nature Reserve in Sichuan province.
Source: https://www.dailymail.co.uk/news/article-8780767/Rare-albino-camel-captured-camera-nature-reserve-China.html