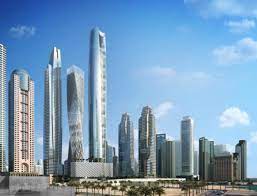 For Dubai itself, nothing much changes – the city will continue to host the ‘world’s tallest hotel tower’, with the Ciel taking over the title from Gevora Hotel, which is 356 metres high and located on Sheikh Zayed Road.

According to Rob Burns, the CEO of The First Group, developers of Ciel, “We are actively marketing the project to international investors, but will expand our programme to consumer markets in 2023 to ramp up excitement ahead of the hotel’s official opening.”

In January last, the project reached its halfway point of construction, with work on the megastructure continuing beyond its 52nd floor.

Designed by London-based architect NORR, Ciel will have more than 1,000 rooms, a glass observation deck on the 81st floor, and a signature rooftop Sky Terrace with an Infinity pool. Speeding on construction is progressing as per the plan, with the project scheduled to complete in Q4-2023. The First Group’s chief development partner is China Railway Construction Corporation, the world’s second-largest construction and engineering company by revenue. The project made much headway during the peak phase of the Covid disruptions, hitting key milestones during the timeline.

Dubai Marina houses some of the finest hotel properties in Dubai, including Habtoor Grand Resort, Address Dubai Marina, and Wyndham Dubai Marina. Burns said, “Dubai Marina consistently outperforms the citywide average for hotel occupancies and revenues, as seen in this year’s first-half. In March, for example (coinciding with the close of Expo 2020 Dubai), the Dubai Marina reported the city’s highest average occupancy rate of 93 per cent and RevPAR of Dh 1,107, as per STR data.

“Given the area’s stellar operational performance, we are highly confident Ciel Tower will be extremely well received by the market when it opens in 2024, given its profile, global buzz and an unrivalled mix of a unique lifestyle, leisure and F&B facilities.”

With the developer planning to sell hotel rooms, these could turn out to be among the premium investment options within the Dubai Marina cluster. In fact, there are already several property listings of Ciel units, with studios quoting at Dh1.3 million and over. With the ‘world record’, the Dubai Marina location, and the prospect of sustained demand for hotel and other options in Dubai justifying the premium.

But a spokesperson of The First Group said: “I can confirm that Ciel will be a fully-operated hotel and there will not be any serviced apartments. We have not made a final decision on who will be operating it, but the interest I high. We never publish our prices online as a company, (and) so will be addressing what you saw of private property (listings).”