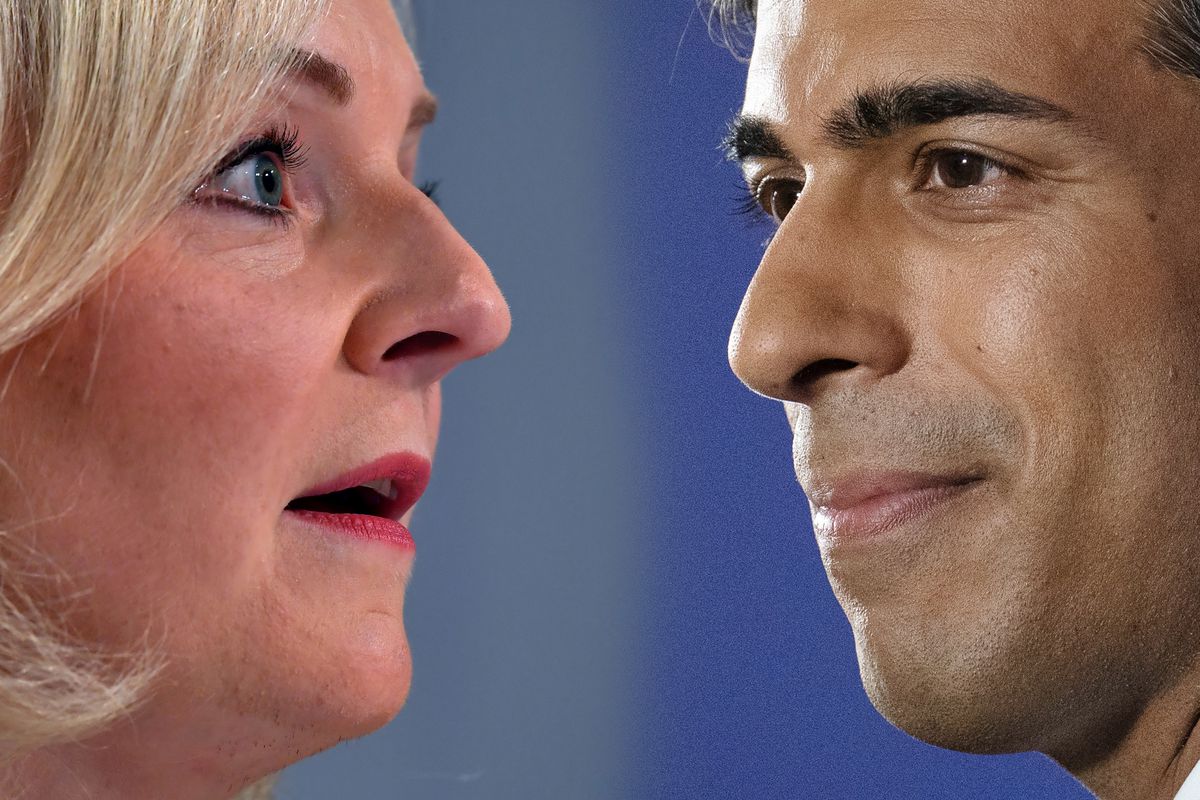 Liz Truss and Rishi Sunak will compete for the position of British prime minister.

After eliminating Penny Mordaunt in the final round of voting this afternoon, over 180,000 Conservative members will now choose between the two candidates to lead Britain.

The trio was competing for the votes of Kemi Badenoch, a former equalities minister who was defeated last night with 59 votes. She shared Truss’ perception that she was favored by party members on the right.

Foreign Secretary Truss is now the front-runner to succeed Boris Johnson after the winner is declared on September 5.

This is due to the fact that polling of Tory members, albeit with tiny samples, consistently showed that former chancellor Sunak would lose to any of his opponents.

The low levels of participation in the current surveys make it difficult to determine who the Tory membership favors with any degree of accuracy.

However, a YouGov poll conducted over Monday and Tuesday of 725 party members indicates Mr. Sunak would fall short of Ms. Truss by 54 votes to 35, excluding don’t knows.

Ms. Truss has been pegged as the contest’s favorite by bookmakers, with William Hill giving the southwest Norfolk MP odds of 4/7 to triumph and giving Mr. Sunak chances of 6/4.

Mr. Sunak will be counting on polished performances during the roughly 5-week period of hustings and other events to sway voters in his favor.

On Monday, the two will engage in a BBC debate.

The campaign for Ms. Truss earlier stated: “Now is the moment for the party to unite behind a candidate who will rule in a Conservative way and who has proven she can deliver time and time again.”

Polls indicating that Mr. Sunak might defeat Labour leader Sir Keir Starmer and “is the candidate the public thinks would make the best PM” have been the focus of his campaign.

It’s a very large lead over the second-placed candidate, Liz, they remarked as they spoke to media outside the committee chamber in Westminster where the results were announced.

I believe we are happy with it.

According to them, it was “absolutely not accurate” to claim that Mr. Sunak’s campaign had urged supporters to vote strategically in order to force a run-off with Ms. Truss.

“Everyone who wants to see Rishi through voted for him,” they claimed. “Our vote was up significantly from yesterday.”

Going ahead, there will be a “robust policy debate,” in which candidates will talk positively about their qualifications.

There were several rumors of votes being “lent” by his campaign to create a struggle against his preferred candidate before this afternoon’s election.

A “stop Liz” campaign was reportedly in the works as well, amid worries that Mr. Sunak and Ms. Truss may insult each other “blue on blue” all summer long, severely harming the Conservative Party.

Veteran Tory David Davis referred to the campaign as the “dirtiest ever” earlier today.

Tobias Ellwood, a senior Conservative and supporter of Mordaunt, had the whip removed after missing a crucial vote, despite the fact that 11 other colleagues who also missed it did not receive the same treatment.

However, he temporarily reinstated the whip this afternoon so he could cast a vote in the election.

Wes Streeting, the shadow health secretary for Labour, tweeted in response to the outcome: ‘Our next prime minister will be someone who supported Johnson, voted in favor of each of his 15 tax increases, and repeated his lies.

“After failing for 12 years, the Conservatives anticipate to continue failing. It’s time to move on. Britain needs a fresh start, and only Labour can provide it.

After the initial eight candidates were reduced by MPs to just Mr. Sunak and Ms. Truss, it is now up to Conservative party members to choose who will take Mr. Johnson’s place in Number 10 and lead the nation.

Surprisingly, it is unclear how many individuals will be making the crucial choice that would affect millions of people.

This is due to the lack of centralization of Conservative Party membership data and the party’s decision to withhold precise membership counts from the Electoral Commission.

In the previous leadership election, where Mr. Johnson defeated Jeremy Hunt, approximately 160,000 members were entitled to vote; however, it is anticipated that this number has increased since then.

It may have increased to 175,000, according to Tim Bale, professor of politics at Queen Mary University of London, but this is impossible to confirm.

It is a given that many voters will cast postal ballots in the upcoming weeks.

In the 2019 leadership election, 87 percent of eligible voters participated, compared to 78 percent in 2005.

Like members of every other British political party, Conservatives belong to a demographic subgroup that is not at all typical of the country’s overall population.

With 40% of them being over 65, there are more male members of the Tory party than female members.

A whopping 95% of them identify as white British, and the vast majority are what are known as “ABC1s”—those who are wealthier and have better-paying occupations.

In addition, Tory supporters are twice as likely to reside in the south of England than the rest of the population of Great Britain.

On Monday, September 5, the outcome of the postal vote will be made public.

The victorious candidate will then have two days to get ready for their first PMQs, which will be on Wednesday, September 7, and their first confrontation with Labour leader Sir Keir Starmer.