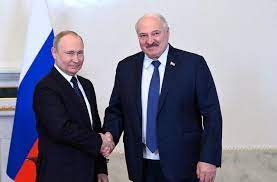 He said Iskander-M systems “can fire ballistic and cruise missiles, both conventional and nuclear types”. The systems have a range of up to 500km (310 miles).

Tensions between Russia and the West have escalated, following President Putin’s decision to invade Ukraine on 24 February.

Mr Putin has made several references to nuclear weapons since then, which some have interpreted as a warning to Western countries not to intervene.

Speaking in St Petersburg, Mr Putin said Russia would help to modify Belarusian SU-25 warplanes so that they could carry nuclear weapons, in response to a query from Mr Lukashenko.

“Ambulances and rescuers are on site. In two buildings, the rescue and evacuation of residents is under way,” he added.

AFP news agency reported that a residential complex in the city had been hit.

Taking the city means Russia now controls nearly all of Luhansk region and much of neighbouring Donetsk – the two regions that form the vast industrial Donbas.

In his video address late on Saturday, Ukrainian President Volodymyr Zelensky pledged to take back “all our cities” occupied by Russia.

But he said the war with Russia had entered an emotionally difficult stage and he did not know how many more blows and losses there would be.

On Friday night Russia launched a barrage of missiles at targets in the north and west of Ukraine. At least three people were killed and more may be buried under rubble in the town of Sarny west of Kyiv, a local official said.

Some of the rockets were fired from Belarus, Ukraine said. Belarus has provided logistical support to Russia but its army is not officially taking part in the conflict.

Ukraine’s intelligence service said the missile strikes were part of Kremlin efforts to draw Belarus into the war.

Russia’s capture of Severodonetsk comes ahead of a week of Western diplomacy, with US President Joe Biden flying to Germany for a G7 summit followed by Nato talks.

In recent months, the Western alliance has shown signs of strain and fatigue but on Saturday UK Prime Minister Boris Johnson said Ukraine could win its battle with Russia.

“Now is not the time to give up on Ukraine,” he said.

On Sunday Indonesian President Joko Widodo, who is due to attend the G7, said he would urge the Ukrainian and Russian leaders to restart dialogue.

“War has to stop and global food chains need to be reactivated,” he said.

At Saturday’s televised meeting with his Belarusian counterpart Alexander Lukashenko in St Petersburg, Mr Putin said: “We have made a decision: within the next few months we will hand over to Belarus the Iskander-M tactical missile systems.”

He said all the details of the transfer would be worked out by the ministries of defence of the two countries.

Iskander missiles have already been deployed in Kaliningrad, a small Russian Baltic exclave between Nato members Lithuania and Poland.

The two presidents also discussed Lithuania’s decision to prevent some goods being transported to and from Kaliningrad – a move that has angered Moscow.

The Belarusian leader said Lithuania’s move was “a sort of declaration of war” and “unacceptable”.

Steel and some other Russian goods come under the EU sanctions imposed over Russia’s invasion of Ukraine. Lithuania says its measures affect only 1% of the normal Russian goods transit on the route, dismissing Russian talk of a “blockade” of Kaliningrad.

Is ChatGPT the Start of the AI Revolution?