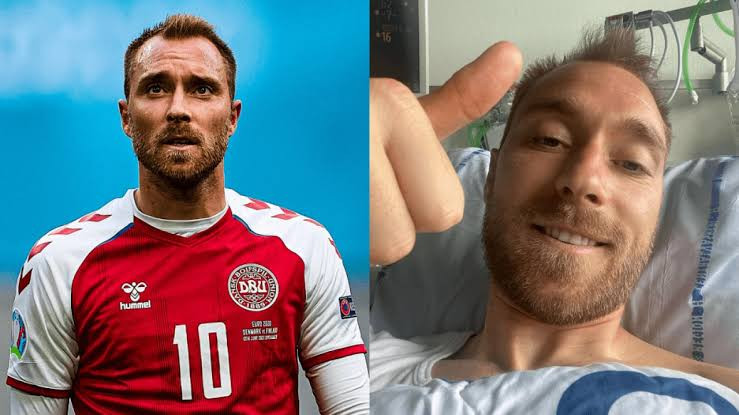 Denmark and Brentford footballer, Christian Eriksen says it feels like a miracle to be able to play football again after collapsing while playing for Denmark at Euro 2020 last summer.

Denmark were playing Finland in their opening game of the Euros on 12 the of June, delayed by a year because of Covid, when the midfielder collapsed on the pitch in the 41st minute.

He received CPR and after 15 minutes of treatment was carried off on a stretcher. Eriksen was awake in hospital and, after a delay of about three hours, the match resumed with Finland winning 1-0.

The 29-year-old former Inter Milan and Tottenham footballer has been fitted with an implanted cardioverter-defibrillator (ICD), a type of pacemaker, after suffering cardiac arrest at the tournament last summer .

He has now joined premier league club, Brentford on a six-month deal after his release by Inter Milan

“At that time I had no idea what had happened, then it goes through my head: ‘Did something happen with my legs? Did I break my back? Can I lift my leg up?’ – all small things I was trying to do to see what happened.” he said

“Then in the ambulance I heard someone say ‘how long was he out for’ and someone said ‘five minutes’ and that was the first time I had heard I was gone.” he added

Asked if it will feel like a miracle to return, Eriksen added: “Definitely. I think it will get more and more obvious the closer it gets to being in a real game – being in a stadium, being in a game, you get all the emotion and adrenaline from that.”

“The first thing is to show the gratitude,” Eriksen told BBC Sport.

“To the people around me, the team-mates, the doctors first on the pitch, the team doctors and paramedics and then at the hospital, to do everything and check everything.

“Then all the messages from people to show support for me and what my family have been through. It has been really lovely to see all the grateful messages.

“I am very lucky and I have told them face to face, I am very happy they did what they did otherwise I would not be here.”

He added: “For me it was unlucky in a lucky place. I wouldn’t hope anyone to get it, I never thought I would get it myself when it happened but in the place it happened I was lucky with the people around me acting so quickly. I was really grateful the doctors were in that place.

Eriksen says he feels he’s in a better condition now than before the incident.

“I won’t change my style of play,” added Eriksen. “I have had the time to be disciplined for the last six months to do extras, so even now maybe I am in a better condition than before, just the football missing.

“I feel like me so don’t see a reason why I can’t get back to the same level.”