Phlegm the Creative Street artist who Transform Abandoned Factory into a Mausoleum of Giants. 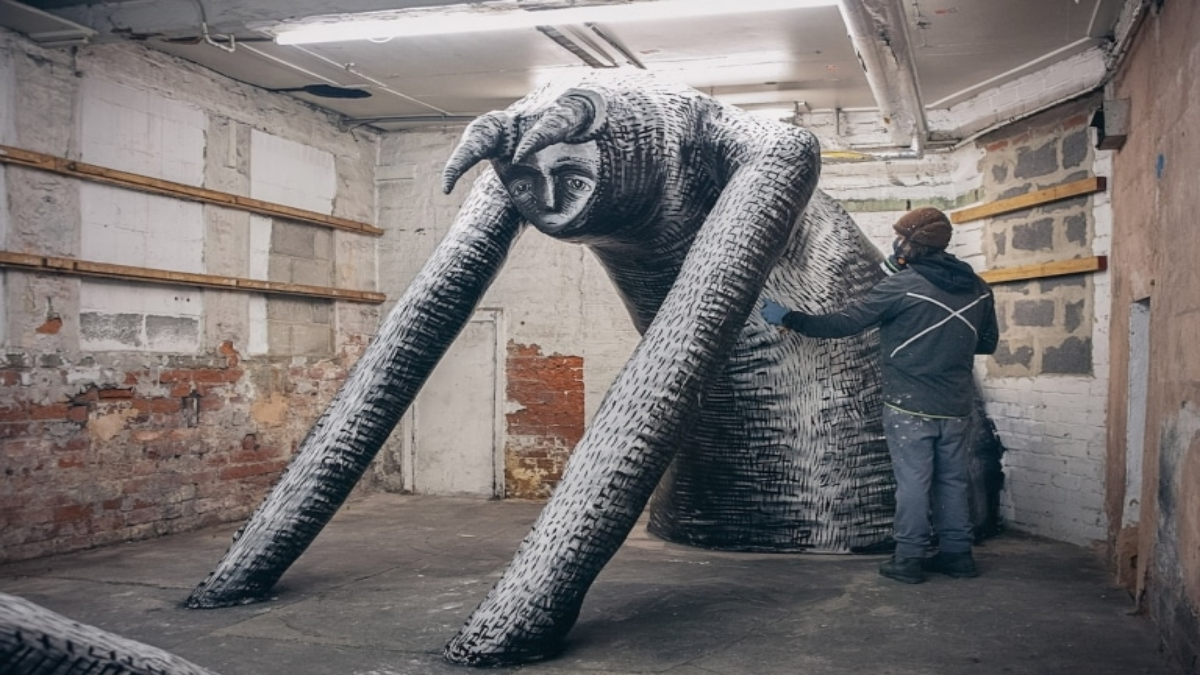 Phlegm, a British born creative artist, vividly portrays his recognizable characters in a grand special performance presented in Sheffield, a place where he was raised. In his Mausoleum of Giants, Phlegm effortlessly converted an extended, fanciful creative figures—known for their appearance as a contemporary bestiaries drawn in black and white—into three-dimensional sculptures.

The exhibition is a fantastic show of  the creative street artist, artistic development as he gravitates more towards installation of art. The nearby local industrial building where the large installations are located is the ideal location for Phlegm’s creative artistic work because his eerily colourful murals frequently creep across the architecture, to fill up the equally unsettling empty spaces. In this example, he uses the complex negative space to his advantage by scattering huge creatures all over it.
These fictitious gigantic giants appear as enlargements of Phlegm’s paintings. They appear even more like pen-and-ink drawings that have inched off the page and become three-dimensional sculptures due to their monochromatic skin. By permitting the body shape of his sculptures to protrude through the design, the creative artist makes excellent use of the available space.

For example, a horned being holds a skull in its long, excessively extended arms, which are so long that their elbows are buried underground. Phlegm creates a bizarre fictional world where the human visitors are dwarfed by the enormous size of his figures by enjoying their exaggerated anatomy.

Up until April 6, 2019, Mausoleum of Giants will be on display at Eye Witness Work on Milton Street in Sheffield, England. Visit the website mausoleum of the giants, for information on hours of operation and visit planning suggestions.

One thought on “Phlegm the Creative Street artist who Transform Abandoned Factory into a Mausoleum of Giants. ”