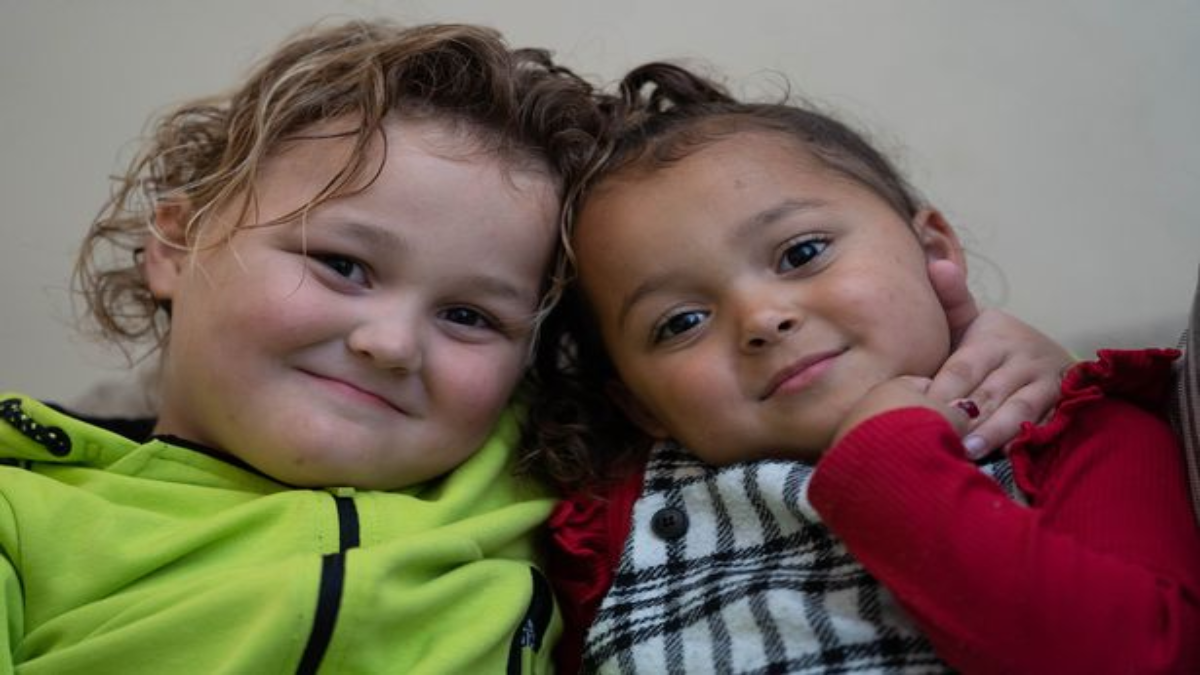 Jade Buckingham worried that she would never be able to realize her ambition of being a mother after doctors informed her that she has two wombs. But against all odds, she became pregnant with twins, and she was eager to give birth to them. She was anxious the entire time she was pregnant following four miscarriages, especially after learning that her twins were developing in different wombs.
Jade, 25, from Sutton-in-Ashfield, Nottinghamshire, however, experienced the biggest shock of her life when her twin children, who were delivered prematurely at just 34 weeks and with entirely different skin tones, were born.

Fraternal twins Lanaé and Lavell, who are now four, developed from different eggs and had their own umbilical cords and sacs.

When Lanaé was born feet first and Lavell was born head first, I knew they would be polar opposites, and they are now, according to Jade.

The identical twins’ distinct skin tones didn’t emerge for a few months, and according to Jade, many people don’t think they are related.

I observed that Lavell had blonde hair and paler skin tone whereas Lanaé had wonderful dark curls as her hair began to develop. They don’t always recognize them as twins when we’re out  and sometimes I have to show people a picture of when they were born to convince them.

When she was just 17 years old, carer Jade learned she had a vaginal septum, a wall dividing the vagina into two sections. Doctors had to undergo a dilation and curettage (D&C) treatment to remove the uterine lining after the patient experienced four losses. She was found to have the rare condition, which doctors believe she was born with, during the treatment.

Jade was warned by doctors at Nottingham University Hospital that she might not be able to have children and that the disease may have contributed to the miscarriages she had suffered.

Jade stated: “I was upset since I had always desired to be a mother.

“Sheena, my 42-year-old mother, offered to be my surrogate if I needed, which was very supportive.

But a year later, Jade discovered she was pregnant. She and her then-partner welcomed their son Cairo, now six, into the world in February 2016.
In September of the following year, 2017, Jade learned she was carrying twins.
I was naturally over the overjoyed because I was enjoying being Cairo’s mother, she says.

It was all I had ever wanted to have him alive and well after worrying that it might not happen for me.

“When I discovered I was pregnant with twins, I was over the moon, but it was terrifying knowing they were each in their own womb.

“I underwent scans every two weeks to keep track of the twins’ growth.

At 22 weeks, Jade received the heartbreaking news, one of the twins, had stopped developing.

It was a terrible situation, but I knew I had to press on.

It was such a stressful moment, but I opted to continue with the pregnancy in the hopes that both would be well.

When Jade went into early labor at 34 weeks on April 29, 2018, she was rushed to the hospital for an emergency c-section.

“I was so glad when they were both delivered and safe with me,” single mother Jade said.

“They had identical appearances as newborns, but after a few months their different skin color began to show through.

“They have such an incredibly love-hate connection as brothers and sisters, but I wouldn’t have them any other way.”