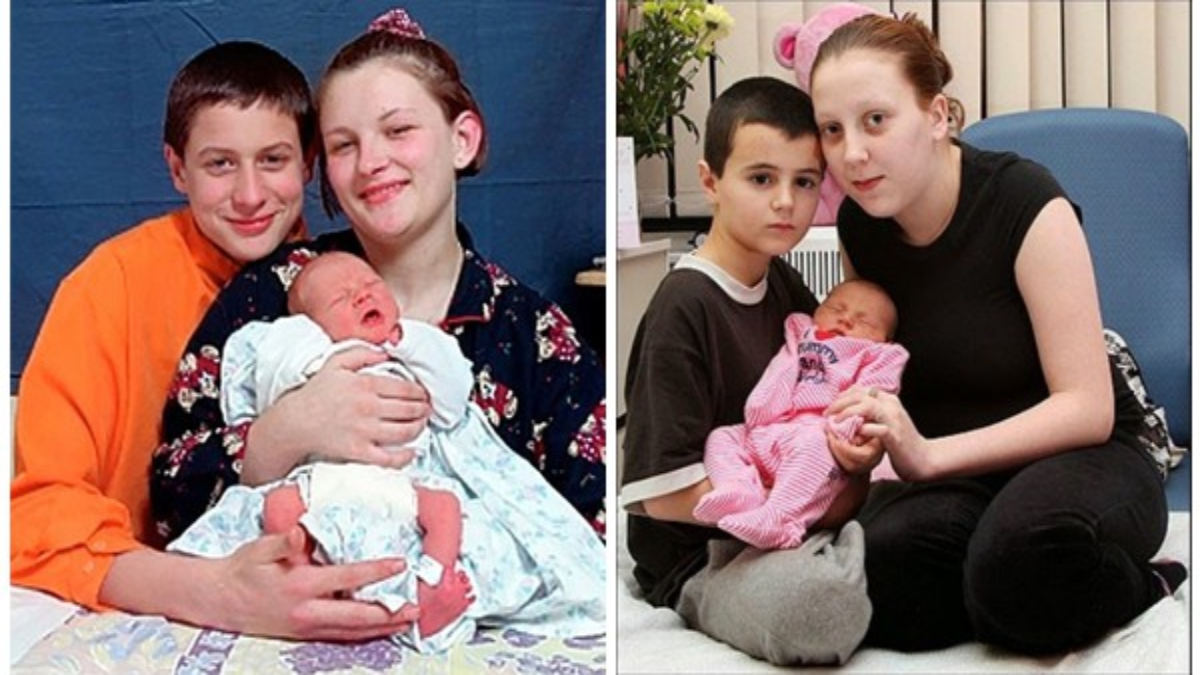 Sean and Emma.
Sean Stewart is the youngest father in the UK, and he is the young boy in this photo. The schoolboy from Sharnbrook, Bedfordshire, had sex with his 15-year-old next-door neighbor Emma Webster when he was only eleven years old.

When Emma was due to give birth, Sean’s mother permitted him to miss school that day. On January 20, 1998, Emma gave birth to Ben Louis with Theresa, Sean, and their mothers, Ray and Shirley, present.

When Sean and Emma made their relationship official, he promised to support her and his son, saying: “I was shocked at first when I found out Emma was pregnant, but I am all right about it now.”

Emma, a 15-year-old, claimed she was unaware that Sean was only 11 when she slept with him. Fortunately for her, social media didn’t exist in 1998, so instead of being referred to as a sick baby snatcher on Facebook, the “sweet” tale of how Sean would scale a roof to meet with Emma made headlines around the globe.

Sean stated to Daily Mail after Emma gave birth “I hope to stay close with Emma for as long as possible.” Every morning before school, she visits my house, and every afternoon, she meets me at the bus stop. Right now, nothing is wrong and everything is fine.
Unfortunately, things did not go as planned, and Sean and emma are no longer in contact.

When he got his 16-year-old girlfriend Sarah Drinkwater pregnant with twins, James Sutton was only 12-years-old. Due to their young ages, most people believed James and Sarah wouldn’t be able to handle it.

However, he and Sarah are still together and have their own house after eight years. The couple has a daughter, age 2, in addition to the twin girls they had when they were teenagers.

While James regrets being known as “Britain’s Youngest Father Of Twins,” he is proud and delighted to have proven the doubters wrong. James, who is now 21 years old, has spent the last five years working full-time for a construction company.

In addition to working as a pharmaceutical researcher, Sarah is actively pursuing a university degree. The couple, who together make a respectable living, bought a £100,000 home in Manchester to provide a safe haven for their kids.

The couple has grown even closer since the arrival of Ellie, a 2-year-old. The twins Leah and Louise, who are 7 years old, are settled in school. Even getting married is on their minds. Sarah, a Salford University student majoring in human biology and health sciences, expressed her satisfaction that their relationship had endured despite their unanticipated arrivals.

Nobody expected James and I would accomplish what we have,” the 24-year-old said.