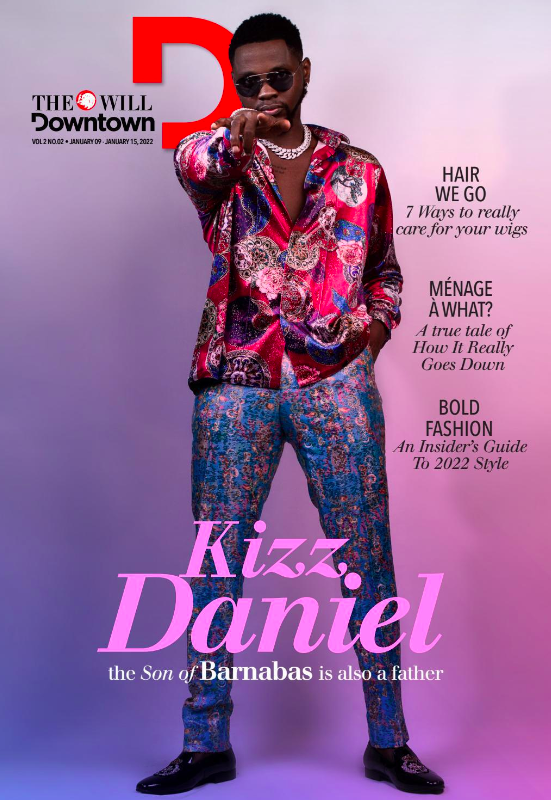 known by his stage name Kizz Daniel, is featured on the cover of TheWill Downtown Magazine’s current edition, where he speaks about becoming a parent, including his social media outrage last year, how he creates hits after hits, and his connection with Nigeria’s music industry.

The editor Onah Nwachukwu had this to say; “Becoming a father himself has also taught Kizz to treat people better. According to the “Pour Me Water” crooner, his kids have a role to play in how he now treats people “It also made me a better person regarding how to treat people. When I meet new people, I can’t quite place my finger on it but the vibe is very different because now, you are treating people the way you want them to treat your kids.”

Read excerpts from the interview below:

First I’d like to say thank God for my kids, for my boys. I wake up every morning and I’m grateful to God for blessing me. Although people will say you have two boys, I know I have three boys because God gave me three boys. So I say a prayer for him every day. And to answer the question I’d say it made me more aware of what’s going on around me. I’m a father and I’m quite particular about energy not just around me but around everyone close to my kids and the mother of my kids. It made me more responsible.

Now I think twice before spending one naira. I used to be a sports car enthusiast, now I’m an SUV guy. I just bought a 2021 Lexus 520 and when I wanted to get it, I knew I wouldn’t drive it. All my cars are sports cars; I’m not a big car kind of guy but now I have to be one.

It also made me a better person regarding how to treat people. When I meet new people, I can’t quite place my finger on it but the vibe is very different because now, you’re treating people the way you want them to treat your kids. They’ll soon grow up, go into the world and when they are feeling cheery or downcast, they’ll call home or experience those emotions first-hand. So yeah, I’m a better person for it.

On his response to a recent social media call-out:

First of all, I have no clue who this person is and I’ve never heard of him in my life. Concerning the tweet, it wasn’t personal. What happened exactly was someone showed me a tweet from a colleague complaining about an artist not being nominated for an international award—and this colleague had a strong argument. The artist in question had a more significant impact on the international scene than the artists on the list but he wasn’t there. Why do we always have to lobby before we get nominated for an award? Do you get what I’m saying? It’s a cabal. Na people wey you know. I wish I could say more but I can’t. But it’s the truth and the industry knows. I didn’t say anything the industry didn’t already know.

On how his late father influenced his career, life and music:

My dad is my best friend. I used the word ‘is’ because he’s still in my heart (he turns around and apologises to his brother wearing a smile) after him, then my brother. So I was really close to my dad but not so much with my mum. As a normal dude, the day I lost my virginity, I should have called my friends but it was my dad. I lost my virginity at the age of 21 —as a kid, I was a bookworm and a huge nerd. I studied Water Engineering and graduated with a 4.32 GPA —so I’m narrating everything to him; from the beginning, all the way to the end and he laughed from start to finish. It was a very weird conversation but that just goes to show how deep the bond went. ‘Oh, I love you so much Baba 70’. The guy doesn’t overthink things at all. He talked me through everything after I told the story. He then said, “this is how you behave now and respect that woman”. He is never that guy to tell you not to. He is always all about respecting women. He married my mum, stepmom and was about to marry a third before he passed away. He loves women.