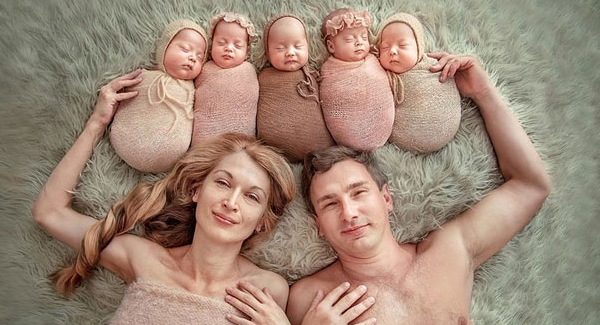 A pleased woman posted lovely pictures of her five darling children on social media while gushing about them.

On July 24, 2016, in the municipal maternity center, Oksana Kobeletskaya, 37, from Odessa, shocked Ukraine by giving birth to five babies. Quintuplets being born is thought to be a rare occurrence in Ukraine. She had a smooth pregnancy and delivered two girls and three boys through c-section safely.

The startling news was revealed to her and her husband during the initial ultrasound examination. The couple already has a 3-year-old daughter. They now have six children as a result.

On the same day they were born, the Ukrainian couple named their children Aleksandra, Dariya, Denis, Vladislav, and David.

Officials from the city of Odessa surprised the delighted parents with a five-bedroom apartment after they welcomed their five new babies. Five newly born babies’ proud parents have revealed touching photographs of the quintuplets for the first time.

Denis, Vlad, David, Sasha, and Dasha pleasantly surprised us because it was easier to work with them during their two months than we anticipated. The children slept soundly, and we were able to create a wonderful story of love and friendship for them and their parents that, I’m sure, started in a mother’s tummy. Photographer Julia shared her emotions on her instagram handle.

Things to consider when carrying quintuplets: You are one in about 60 million people.

Instead of 40 weeks, the typical gestation (amount of time spent in your uterus) is 29 weeks. Your quintuplets are therefore likely to be born early.

You’ll probably deliver via caesarean section. Already, giving birth is physically taxing. It can be much more difficult to handle five distinct babies. A c-section is very common with multiple births.

Multiple births on different days are possible. Meaning that despite being quintuplets, they might not have the same birthday. Several birthday celebrations.