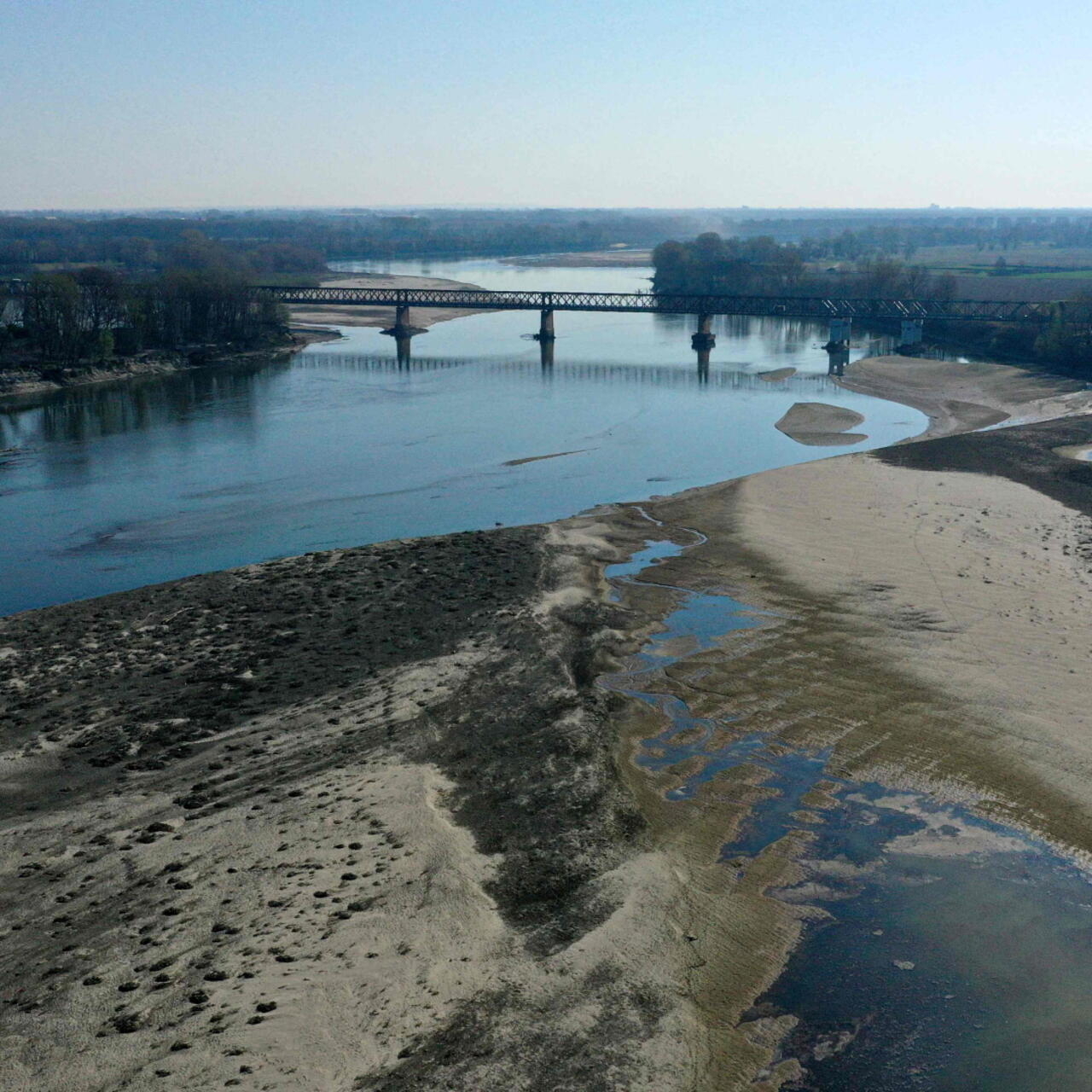 On a farm in northern Italy not far from the Adriatic Sea, Giampaolo Bassi’s crops are in trouble.

“Salty water is killing the plants because they can’t stand such a high concentration,” the 32-year-old says.

He pulls up one of the more sickly looking plants and, where you should see peanuts dangling from the root, there’s nothing.

Giampaolo has had problems with salt in the water before, but not like this.

It’s all linked to the region’s worst drought in 70 years – the result of a lack of rain and snow since winter and higher temperatures.

The River Po, along with its tributaries, is a lifeline for communities across northern Italy.

It runs for 650km (400 miles), from the south-western Alps down to the Adriatic Sea. But annual satellite images show expanding patches of dried-up riverbed.

“Normally you will see that the seawater enters the mouth of the river for a few kilometres,” says Paolo Ciavola, professor of Coastal Dynamics at the University of Ferrara.

“At the moment, official data from the Po Basin Authority shows an ingression of up to 30km from the mouth.”

The freshwater river normally wins in pushing out to sea, but, says the professor: “Right now the river is losing.

“That water is used for irrigation and therefore you can imagine the farmers might suffer huge economic damage from this.”

Near the small town of Sermide in the province of Mantua, locals gather at a boat club cafe for a drink and a cigarette. But the small boats are beached as a large swathe of the river has become a sandbank.

Here the Po splits to either side of a small island.

“It’s an island I can walk to, my boots crunching along the cracked earth. Looking on from the porch of the cafe, locals tell me this isn’t normal.”

Sergio Bettoni is a volunteer there and says it’s the first time the little boats have been completely marooned, on sand which he also claims authorities have allowed to build up.

Maria Grazia Lupi, whose husband works at a cafe near Sermide, says there needs to be a change in the weather.

“I hope that the weather changes and little by little it could return to normal. It’s a disaster for everybody, for the companies here too.”

A sunken World War Two barge and German military vehicle have been revealed in recent months by the Po’s low water levels.

Axis troops were pushed north of the river in 1945 as the Allies advanced.

Sergio points to wooden wrecks poking through the surface which, he says, have also lain there unseen since the war.

This drought is exposing the Po’s hidden history.

Driving through agricultural land in both Lombardy and Emilio-Romagna, you can see pumps dutifully spraying fields as normal.

Often green and luscious, the land looks beautiful; you might not realise anything was wrong.

Likewise the river, to a layman’s eye, looks perfectly healthy in places. But these are two of the five regions where a state of emergency has been declared.

About 75km east of the city of Ferrara, we meet 67-year-old Giuliano Rolfini.

It’s sunset and we’ve stopped to take pictures of water being sprayed on to a field of carrots. We’re right by his house and he’s curious to know what we’re doing.

When we tell him it’s about the drought he says he’s been counting the days since it last rained.

With the rise in the temperatures, it’s getting worse and worse

“I’ve lived here since I was born. This is the worst year ever. The future is totally uncertain.”

This drought, along with a fatal avalanche sparked by the collapse of a glacier in the Dolomites mountains, has again highlighted fears about the effects of climate change.

Overlooking his peanut crops, Giampaolo can’t put an exact figure on it but fears he could lose up to a quarter of this year’s yield.

He has other produce growing, which is doing fine, but worries for the future.

“Our fear is of the progressive increase of the presence of salt inland, because this causes the soil to become arid. It’s affecting more and more of our land, making it more difficult to cultivate and less productive.”

Rain would help dilute the levels of salt, but Giampaolo says forecasts suggest that, in the short-term, there just won’t be enough.

Prof Ciavola warns that this kind of situation will not be unusual in the future, and Italy, like other countries, will have to adapt.

“Maybe changing the type of crops or optimising water usage in a better way. So it’s not only a short-term but a long-term adaptation strategy.”