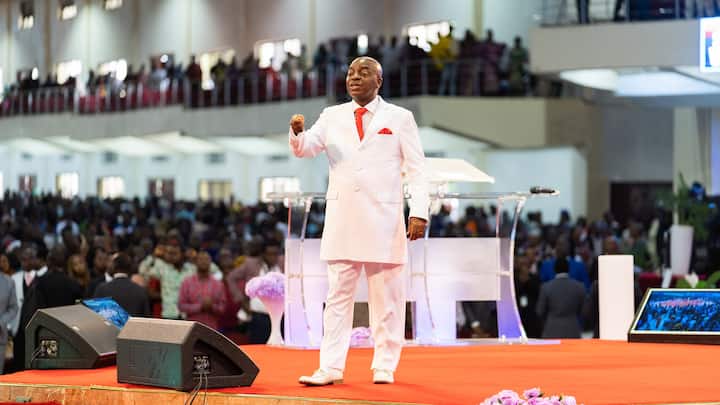 A female preacher has revealed that she saw Bishop David Oyedepo, the founder of Living Faith Church in hell fire. She cried as she shared the vision where she saw Oyedepo with many people who he took to hell. Meanwhile, Nigerians have reacted to the latest revelation with some people asking her to go back to sleep so that she can see clearly

A female preacher has claimed that she saw the founder of Living Faith Church, Bishop David Oyedepo in hell. Photo: Living Faith Ministries Source: Facebook Shedding tears, she asked if her viewers realise the number of their relatives in the journey to hell with the flamboyant preacher

Shedding tears, she asked if her viewers realise the number of their relatives in the journey to hell with the flamboyant preacher?

“The man was going with people. The man was going with people (crying). And he wasn’t alone in those revelation. Do you know how many of your relatives inside? Your children (crying).” Meanwhile, Nigerians have reacted to the latest revelation with some people asking her to go back to sleep so that she can see clearly. Odidika Tessy Nneka “Madam go back to that your sleep and wake up again…you will see right. Heaven at last

Chioma Ngwu Madam at least it’s not your hell…we are already enjoying heaven on earth, you’re there talking about hell. Go back to sleep so you can dream more.”

Chimmy Evans “Why is she crying, she thought that by her crying we will believe her, time has come when we will go back to the Bible standard women should keep quiet in the church, cos I’m seeing in this last days their preaching is causing more harm than good.” Tonny Murhula Musanganya “Why is she being abused here by fans of the pastor? It is just a vision that she saw. Remember God speaks to us in different ways, this could be God is saying to the pastor to change his way of doing his work, don’t dare undermine this message of this servant of God. Some us here are just seeing the noise the pastor makes and the things he has and mega church he is leading, this can be abomination in the eyes of God.”

Meanwhile, a Nigerian female preacher has declared that people who die has football star will go hell. The unnamed preacher made this declaration in a trending video sighted by Legit.ng. According to her, dying as a football star is an automatic certificate to hell fire.