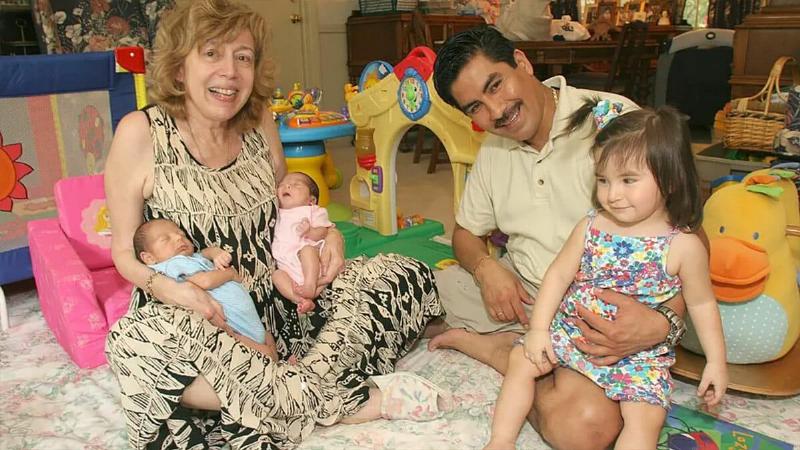 It is a significant deal to turn 60. That’s  60 years of life experience, shared memories, and knowledge with close friends and family. Many people also begin their retirement at this time, shifting their attention from their careers to new pastimes.

But for this 60-year-old, it marked the start of her role as a mother to a set of twins. It is now known that Lauren Cohen is the oldest woman in the United States to have given birth to twins, however due to her advanced age, maintaining her health and that of the children is challenging, especially in the face of critics.

Age Is Only A Number

One day, while dancing her heart out at a dance lesson, Lauren Cohen was out having the time of her life when she caught sight of a certain dancer. Despite appearing so much younger than her, she reasoned that she might be able to ask him to dance with her.

I never imagined he could be attracted to a woman who was so much older, she recalls. He was a fantastic dancer, so when I invited him to join me one night, he agreed.
Lauren had only been married two years and had already gotten a divorce from her ex-husband, who was then 66 years old. There was an instant attraction between Lauren and her dance partner. Despite the 20-year age difference between her and Frank, they quickly fell in love.

The couple went on to get married despite the age difference which was initially being a thing of concerned.

Time Was Running Out

Regardless of their ages, Lauren and Frank were eager to start a future together. The only problem was that Lauren wanted her husband to experience having a family because she was aware of how much he yearned for one, Instead of only watching his wife become older. She wanted him to have kids to watch grow up.

The possibility that Frank would find himself caring for a woman in his 80s with nothing else to do frightened me,  she said. He would also be too old to start over with someone else at that time. The couple made the decision to try to conceive again, but they knew they would have to move quickly: “I really don’t  want to be the one responsible of  him not having  kids, so we resolved to do something about it – soon.”

Marriage comes first, then follow by kids.
The couple considered using IVF to conceive a child, but several medical professionals rejected her because of her advanced age—she was in her late 50s. It was devastating as a result of this. Lauren remembers: “I was older than the age many units would have begin the procedure … It was awful. Frank needed a good home, and I was determined to provide him with one, but we kept getting turned down.
The procedure didn’t get any simpler once she was eventually approved at a health centre: “There were so many tests — I did everything from running on a treadmill to visiting a psychiatrist before they even tried IVF. But I eventually received the go-ahead because of my superb health. Lauren had three embryos implanted using donor eggs. She already past menopause, so this was her only option.

Making History as the Oldest Mother to Have Twins

The IVF procedure was successful, and the couple had a baby. They first welcomed a girl, and then Lauren learned she was carrying twins a year later! Lauren gave birth to twins Gregory and Giselle via IVF and donor eggs when she was almost 60.
Due to this, she became the oldest mother in the United States to give birth to twins, equaling the record set by an unnamed British woman on Christmas Day 1993.
I don’t feel like a record holder, Lauren say.  I have arthritis, but I’m otherwise in great shape. But maintaining good health presents its own challenge.

Lauren prioritized her health above all else because she has three young children. She cites her kids as the reason for her motivation: “I want to play with the kids and push them on swings.” She also hopes to see her kids go to college. Lauren does yoga and pilates once a week in an effort to make her dream a reality.
Additionally, she consumes a lot of supplements: “I take 98 tablets a week, a combination of prescription medication and nutritional supplements. I’m hoping they’ll give me long enough.

In spite of this, Lauren doesn’t worry: “I’ll do whatever it takes to live as long as I can,” she declares. “My goal is to support them through college. I have to stay alive  for another 17 years, or until I’m 81. Lauren has even joined “Life Extension”, an organisation that promotes readers of its magazine to live as long as possible.

Her own daughter disowned her.

It has not always been a happy journey for Lauren. Unfortunately for her,  her oldest daughter Renne didn’t like the idea of her becoming an older mother.

In fact, Renne said that she was “disgusted” and shunned her mother after learning of the pregnancy. When I informed Renee I was expecting a child,  she was horrified. She claimed it was strange and unnatural. She then became really offended, began to cry, and told me it was inappropriate.”

These days, they only cross each other paths in restaurants four times a year. The most heartbreaking aspect is that Lauren is unable to interact with her grandkids: “Because of that, I can’t visit my 16-month-old granddaughter Hannah, she claims. How can I possibly get to know my granddaughter in a restaurant? Renne refuses to enter Lauren’s home.

Lauren believes she made the correct decision despite the conflict: “It aches my heart to have mostly lost contact with her. Although I’m quite disappointed, but I just had to.”

Lauren finds it difficult to be an older mother; in fact, many people mistake her to be the  grandmother to her kids.  Lauren is content and determined to spend as much time with her kids as she can, despite her daughter’s displeasure and the opinions of others. She says, “I’ll do all I can to make sure I survive as long as possible.” Along with everything else, I eat the appropriate food.

Although she is aware that her time would inevitably come, she wants to prepare everything for her family now. “When I pass away, I know Frank will have a great network of kids surrounding him. He’s quite close to the children, and they’ll offer him something to look forward to when I eventually start to get weak.