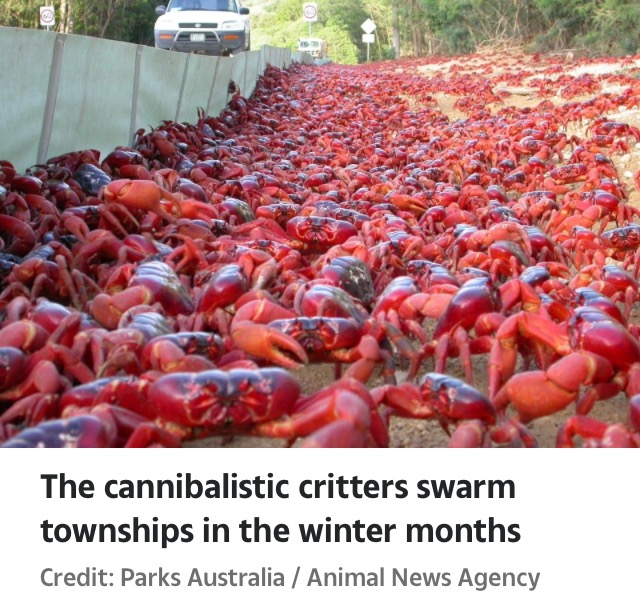 The swarm of cannibalistic critters shut down roads from the jungle to the coast on Christmas Island off Western Australia.

Unbelievable footage shows the bright-red creatures descending on townships in what is considered one of the greatest animal migrations on the planet.

Every year, an estimated 50 million crabs make their way from the forest after rainfall in October or November and head to the ocean to mate.

The crabs generally eat leaves, fruits, flowers and seeds but have a dark side that sees them eat their young.

The crabs’ cannibalistic side comes out when babies returning from their first ocean migration are feasted on by adults as part of their diet.

Their journey takes them through residential areas and tourist hotspots throughout the spring and summer months.

Photos and video shared by Parks Australia show thousands upon thousands of crabs scurrying across roads and specially-constructed bridges.

The animals also turned up at the door of an office block, the organisation reported.

A spokesperson for Parks Australia, which looks after the country’s green spaces, said: “With red crab migration in full swing on Christmas Island, the crabs are turning up everywhere, including at the door of an office block.

“Our staff have been out managing traffic, raking crabs off roads, and providing updates to the community on road closures.”

National Park acting manager Bianca Priest said the spectacular annual event on Christmas Island, which is popular with travellers, has become an attraction itself.

She said: “World-renowned naturalist Sir David Attenborough described the red crab migration as ‘like a great scarlet curtain moving down the cliffs and rocks towards the sea’ and considered filming the spectacle as one of his 10 greatest TV moments.

“Over the years visitors have travelled from every corner of the world to witness this wildlife phenomenon.”

One thought on “50 Million Cannibal Crabs Shut Down Roads In Australia (Pictures, Video)”